Is there a better equalizer for autos of all shapes and sizes than the moose test? In the span of just one second, the inherent balance and handling characteristics of a vehicle are revealed. Oversteer, understeer, and weight transfer are measured not for maximum performance on a track, but for control in emergency situations. As such, machines you’d expect to perform well don’t always shine through – hence why its an equalizer.

We’ve featured many videos from km77.com showing cars tackling the moose test, and the latest is arguably the hottest hot hatch of them all. The Mercedes-AMG A45 S packs an overachieving 2.0-liter turbocharged four-cylinder making 415 horsepower (309 kilowatts), sent to all four wheels through a dual-clutch automatic transmission. It’s quick, and on a track it can dance with either crisp handling, or glorious tire-smoking powerslides. In the real world, the moose test suggests it’s … not too bad actually.

The maximum speed achieved for a clean run was 75 km/h (47 mph), which the video says was a bit lower than expected considering the car’s grippy tires. However, the A45 S was said to be smooth and easy to control during the emergency swerve, which is what you want in such a situation. Mild to moderate understeer is seen on the second steering input, but it’s scrubbed quickly by the rear axle stepping into a touch of oversteer. Exiting the maneuver, the A45 S looks relatively neutral, with perhaps just a smidge more oversteer before the car straightens out. 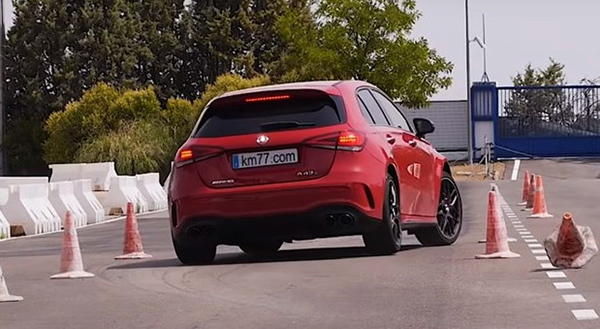 The clip ends with the A45 S running a more traditional slalom. The video praises the hot hatch for being nimble and smooth through the transitions, similar to its performance in the moose test. The driver enters the course at the same 75 km/h speed, but pushes it slightly higher near the end. Understeer crops up with the speed, but overall the mini-Merc turned in a solid performance.