Introduced in 1963, the Mercedes-Benz 230 SL is regarded as one of the most pivotal moments in the manufacturer’s history. Introduced at the Geneva Geneva Motor Show as a replacement for the 190 SL, the 230 SL spawned an entire line of Mercedes sports cars that saw tremendous commercial success and still does to this day with the Stuttgart company being responsible for giving the public some of the most extraordinary vehicles. 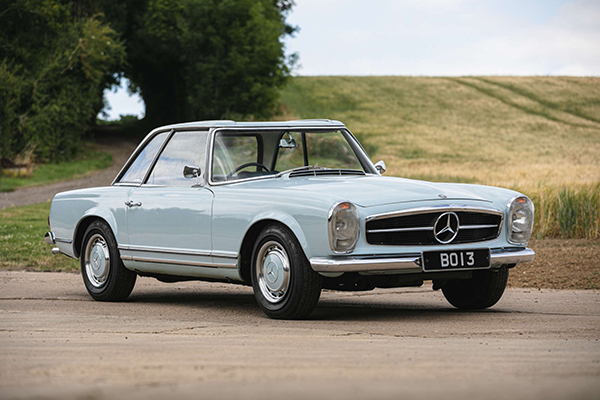 These include but are not limited to the 300 SL Gullwing (joined by the more modern SLS), the C63 Black Series, the SL 73 AMG (whose glorious 7.3L V12 engine sits in quite a few Pagani Zondas across the world like the F, the HP Barchetta, the Cinque or the Tricolore), the motorsport legend CLK GTR and the all mighty Mercedes-Benz SLR McLaren (which coincidentally has a Stirling Moss variant, one of the wildest cars ever to be made). Those are just a few of the cars we know and love, which would have never existed without the first step taken by this very model.

The 230 SL departed from the 4-cylinder of the 190 SL, switching to a 2.3 L inline six, with an output of 150 ps (148 hp). While a lot of the underside of the car was tried and tested by Mercedes, the design was brand new. The distinctive roofline envisioned by the French automotive designer and classic car enthusiast Paul Bracq earned the Pagoda moniker for the 230 SL and made it one of the most beloved sports tourers of its time. And still remains highly sought-after by collectors to this day. 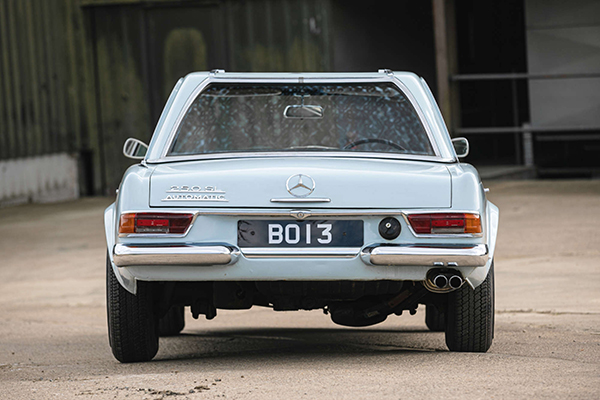 However, the car was not just looks and no grunt. The 230 SL, made a racing debut before being officially launched. And what a debut it was, winning the Spa-Sofia-Liège Rally (an endurance event spanning just over 3,400 miles with 90 hours of racing involved) in 1963.

With such a sparkling debut, it was only natural that one of the greatest racing drivers of the era would grab one for himself. We’re, of course, talking about Sir Stirling Moss, who had won the Mille Miglia in 1955, had been a Grand Prix winner with Mercedes and the first Brit to win the British Grand Prix in a smashing 1-2-3-4 victory for Mercedes, along with many other races during his illustrious career. He is known as the Uncrowned Champion because – despite his magnificent command over the single-seaters – he never won a Formula One World Championship, finishing runner-up four years in a row and in third place for the next three years. 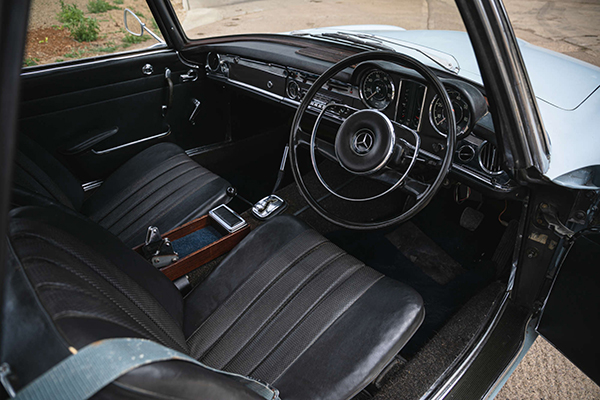 However, with a customer of such repute, the car in question would not be a standard issue 230 SL. Sir Stirling Moss convinced Mercedes to offer him a couple of very special features, with his first request being that his car would come equipped with the more powerful engine from the 250 SL, which was not yet available in the UK market. However, Mercedes acquiesced to his request and provided him with a UK-spec car, displayed at the 1966 Earls Court Motor Show. But Moss was not satisfied with just getting the bigger engine. A reference code can be found on the data-card of Moss’ 230 SL Pagoda, attesting that the engine must be specially selected on the Dynotech for best maximum performance.

The other feature that Sir Stirling Moss requested is maybe even more special. He convinced Mercedes to outfit the car’s hardtop with a distinctive opening roof vent. Mercedes once again met his demands, with the roof vent’s flap and hinges being engineered to the same specifications as the one that can be found on the magnificent 300 SL Gullwing.

All in all, this 230 SL is a legendary car with an owner just as legendary, that also comes with two features that are extremely rare, if not completely unique. If this does not qualify as one of the most exciting and interesting vehicles to be auctioned off this year, I don’t know what does.