It was more than three years ago when Mercedes-AMG unveiled the GT Concept with a plug-in hybrid powertrain featuring a combined output of 805 horsepower (600 kilowatts). The Geneva showcar evolved into the confusingly named GT 4-Door Coupe as a sportier take on the CLS recipe. The model’s lineup currently tops out with the GT 63 S sans electrification. 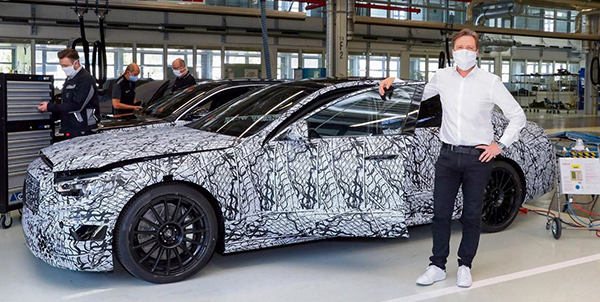 The plug-in hybrid derivative has been spied repeatedly and is expected to morph into the GT 73e in the following months or early next year. It looks like it won’t be the only AMG to feature a twin-turbo 4.0-liter V8 working together with an electric motor as a new report states the next S63 will rock a similar if not identical setup.

That’s the story we’re hearing from our German pals at Mercedes-Benz Passion Blog as they claim the fullsize sedan in its sportiest guise will boast a 603-horsepower combustion engine and a 201-hp electric motor. That would give it a total output of almost 805 hp in a car believed to go by the lengthy name of Mercedes-AMG S63 EQ Performance 4Matic+.

Interestingly, the report goes on to specify AMG will not offer a conventionally powered S63, meaning the top athlete in the S-Class lineup will come exclusively in electrified guise. As we’re sure you’ve heard by now, the AMG S65 will not return for the W223 generation as the twin-turbo V12 engine – now with all-wheel drive for the first time – is set to become a Maybach-only affair.

The S63 Sedan will be the only full-fat AMG model of the next S-Class seeing as how aside from the S65’s demise, the S-Class Coupe and Convertible will be phased out together with their spicy S63 and S65 derivatives.

While the standard S-Class will premiere on September 2, the S63 is expected to debut sometime in 2021 and go on sale later that fall.