Like it or not, the Mercedes-Benz S-Class has always been the epitome of luxury sedans. It keeps it simple and classy for the deep-pocketed owners, cocooning them from the outside environment, and keeping them busy on the go with the latest technology gear available. 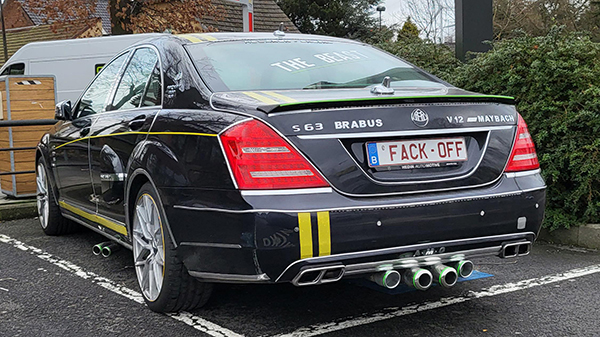 That’s the main recipe anyway, because there’s nothing classy about the one pictured in our image gallery. Part of the W221 generation, which was built from 2005 to 2013, it is registered in Belgium, judging by the controversial license plate, and should see a shrink about that serious identity crisis.

There are a lot of things happening here, so bear with us, as we’ll start with the yellow lines that somewhat remind of the brand’s First Edition models. The wheels have a similar trim, and more decals were applied to the rear windscreen. ‘The Beast’ has two antennas, one on the roof and the other one on the trunk lid, because good radio reception is apparently a must for the owner.

A rather discreet spoiler was also attached to the trunk lid, with a lime green touch, and beyond these, the S-Class in question sports numerous chrome trim add-ons, and just about any Mercedes-related logos that the owner could find. S 63, Brabus, V12, and Maybach sit between the taillights, and the AMG badging was added to the diffuser.

Additional Maybach and Rocket logos can be seen on the C pillars, and it appears that the front fenders sport even more such parts. If you look closely, then you will also see the McLaren emblem, as well as several LED strips.

There is no such thing as having too many tailpipes, apparently, as we counted a total of 10 in the picture shared on Reddit. Still, we could be looking at 12 in total, as the side exhaust pipes were likely replicated on the right side too. Guess we should probably ‘FA*K OFF’ now, right?