Mercedes-Benz decided to halt exports to Russia. The premium manufacturer will also cease manufacturing there until further notice. 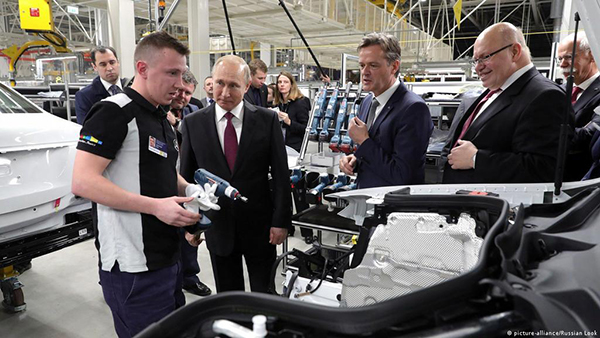 “Mercedes-Benz will suspend the export of passenger cars and vans to Russia, as well as the local manufacturing in Russia”, the company announced. The Germans have been building the E-Class and several SUVs in a plant, located an hour’s drive north of Moscow since 2019, with 1,000 employees. At the grand opening, President Vladimir Putin signed the hood of a Mercedes. His armored state limousines bear the three-pointed star logo.

Furthermore, Daimler Truck Holding AG announced the end of all business activities in Russia and of the 12-year partnership with the local truck builder Kamaz. The Russian company also builds armored vehicles.

Mercedes sees its activity in Sindelfingen affected by the war in Ukraine, due to lack of cable harnesses. A facility in the country now invaded by the Russian troops build the parts.

Thus Mercedes joins the long list of car companies that already shut plants and halted exports to Russia. BMW, Ford, General Motors, Renault and Volkswagen made the same decision, indicating logistical issues due to the financial sanctions there.

Companies outside the car industry have taken similar decisions. Brands such as Apple, Nike and Google halted all products sales in Russia. Boeing and Airbus have also suspended major operations in Moscow and will not be supplying spare parts to the country. Meanwhile, Disney will not be releasing any movies there.

Social media is also joining the list. Facebook-parent Meta announced that it would block access to Russian news outlets RT and Sputnik across the European Union. Twitter made a similar move, stating that it would reduce visibility and amplification of Russian propaganda. YouTube also blocked Russian state media.

BP and Shell, Mastercard and Visa will also comply with the sanctions imposed by the European Committee. A total of approximately 100 brands have said do svidaniya (goodbye) to Russia and Vladimir Putin.