The German carmaker is one step closer to fully autonomous driving after it received the Level 3 certification for the Mercedes-Benz S-Class equipped with the DRIVE PILOT starting with the first half of 2022. 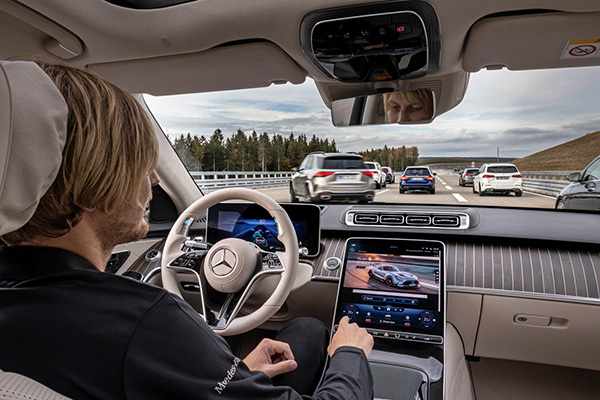 Mercedes has secured approval from the German government to put its Level 3 autonomous driving technology on the road. The system will be offered to the public early next year on the new Mercedes S-Class and EQS saloons – but there’s a few caveats to the roll out.

From launch, the Level 3 system (dubbed Drive Pilot) will only be available in Mercedes’s home market of Germany. Drivers will also only be able to activate the technology in slow-moving traffic on the motorway at speeds of up to 60km/h (around 37mph).

Mercedes also says that its Drive Pilot system will allow the driver to perform “ancillary tasks” on the car’s infotainment system, such as online shopping, replying to emails or watching a film, which is a huge leap forward in autonomous driving technology and legislation. Until this point, self-driving systems have required the driver’s supervision.

The Drive Pilot system gathers data from an array of LiDAR sensors, cameras and GPS trackers, which keep tabs on the car’s surroundings and allow the AI to react intelligently – and, more importantly, independently – to hazards such as swerving traffic or impassable congestion along the driver’s route.

There’s a moisture sensor in one of the wheel wells, so the system can keep track of the road conditions and adjust its driving style accordingly. Mercedes has even included an arsenal of microphones and a camera for the rear window, which are specifically designed to detect blue light vehicles and inform the car’s AI to move aside.

Mercedes says the system’s approval by the German Federal Motor Transport Authority has paved the way for the technology to be rolled out internationally. The Drive Pilot system will still need to pass over the desks of British legislators before we’re allowed to use it on UK roads, but the fact that it’s met European safety standards places it on good footing.

Markus Schafer, Mercedes’s chief technology officer, said: “For many years, we have been working to realise our vision of automated driving. With this LiDAR based system, we have developed an innovative technology for our vehicles that offers customers a unique, luxurious driving experience and gives them what matters most: time.

“With the approval of the authorities, we have now achieved a breakthrough: We are the first manufacturer to put conditionally automated driving into series production in Germany. With this milestone, we are once again proving our pioneering work in automated driving and also initiating a radical paradigm shift.

“For the first time in 136 years of automotive history, the vehicle takes over the dynamic driving task under certain conditions. At the same time, we are pleased that Germany is continuing its pioneering role in automated driving with this approval.”