Cabriolet and coupe body-styles are not as popular as they used to be, with most automakers dropping such models from their range. Mercedes has a long tradition in the segment so instead of discontinuing the two-door variants of its C-Class and E-Class sedans like it did with the S-Class, it plans on introducing a new model that will serve as an indirect replacement for both believed to be called the CLE.

The Mercedes-Benz CLE made its spy debut last year at the Nürburgring, with camouflaged prototypes of both the regular and the performance-oriented AMG variants making spy appearances during winter testing in Sweden. To date, we have only seen spy photos of the CLE Cabriolet flaunting its retractable fabric roof but there will also be a CLE Coupé with frameless windows and a sexy sloping roofline.

Based on the spy photographs, our associates Jean Francois Hubert/SB-Medien created a speculative rendering of the upcoming drop-top CLE Cabriolet in its most potent AMG form. Despite the bodywork being all-new, the CLE will be instantly recognizable as a Mercedes thanks to familiar styling cues.

The two-door body will be more sculpted than in the sedans, with more pronounced shoulders. At the front, we expect a Panamericana grille flanked by AMG-style intakes on the bumper, a couple of power domes on the bonnet, and LED headlights stretching towards the fenders. The tail will be an evolution of the theme introduced a while ago by the CLS, with a slanted trunk and horizontally arranged taillights.

The CLE range, including the hotter 43 or 53 and range-topping 63 AMG variants, is expected to be exclusively offered with four-cylinder engines mated to a 9G-Tronic nine-speed automatic gearbox, following the example of the C-Class. While the six-cylinder and V8 engines will be missed, the performance of the four-cylinder units will still be impressive thanks to electrical assistance. The more powerful variants will likely feature plug-in hybrid AWD (4Matic) powertrains combining high power outputs and significantly improved efficiency over the predecessor models.

The flagship AMG CLE 63e 4Matic+ will pair a turbocharged 2.0-liter four-cylinder engine to a 6.1 kWh battery pack and a rear-mounted electric motor that produces up to 201 hp (150 kW / 204 PS). This setup will allow for outputs that could exceed 600 horsepower, making it a lot more powerful than the BMW M4 Competition. 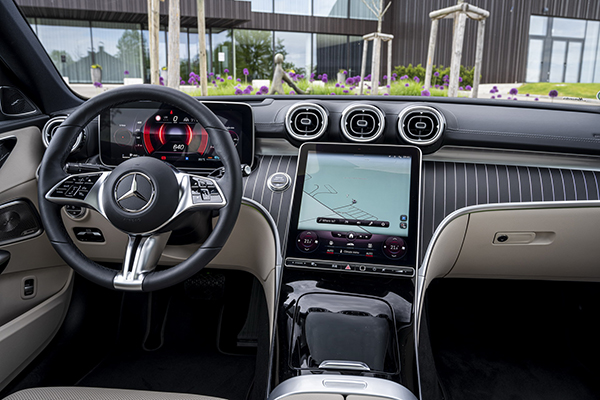 Interior And Tech
While we don’t have spy photos of the cabin, the CLE will most likely share a large portion of the dashboard with the mechanically-related C-Class, which in turn has copied the style introduced by the latest S-Class. This means it will inherit the new screen setup combining a 12.3-inch digital instrument cluster with an 11.9-inch infotainment screen for the MBUX infotainment, slightly angled towards the driver. Some finer details though will likely be borrowed from the larger E-Class to give the CLE a more premium feeling. The two-door model will feature frameless windows and four seats, even though the rear passengers won’t be as comfortable as in the C-Class sedan as outright practicality takes a back seat to style and presence.

Pricing, Trims And Rivals
The fact that two sibling models – the CLE Coupe and the CLE Cabriolet – will eventually replace six (C-, E-, and S-Class Coupe and Cabriolet) is good business for Mercedes who will be saving millions in development costs while still offering its loyal customers a two-door ICE-powered option until the fully electric era arrives. Its closest rivals will likely be the Audi A5 and the BMW 4-Series in both regular and performance variants.

The Mercedes-Benz CLE is expected to debut sometime towards the end of 2022 or early 2023, followed by the next generation of the E-Class. It will go on sale during the first quarter of 2023 with trim levels that are believed to mirror those of the C-Class, including the base Premium moving up to the Exclusive and Pinnacle. While it’s too early for details on pricing, the new convertible model is expected to start from around $60,000 in its base form. The AMG variants will follow within a year of the launch of the standard models.