Mercedes-Benz just produced its 50 millionth automobile, a testament to just how long Mercedes has been screwing together cars. The 50-millionth vehicle also marks the beginning of Mercedes-Maybach S-Class production, as the car is the first of this new generation to be produced. It’s done in two-tone black and silver with chrome galore on the exterior. 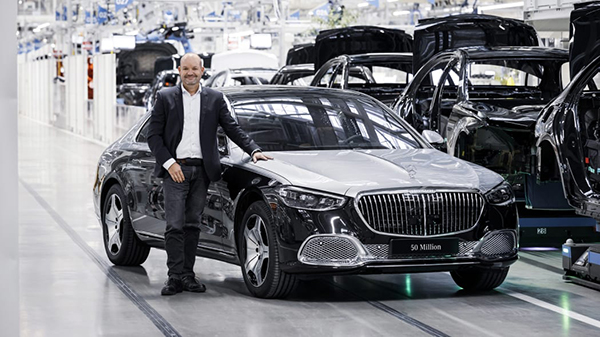 “Mercedes-Benz has always been synonymous with luxury. That’s why I’m very proud of this very special production anniversary: Fifty million vehicles produced is a significant milestone in the history of our company, and an exceptional achievement by the team,” said Jörg Burzer, member of the Board of Management of Mercedes-Benz AG, Production and Supply Chain. “I would like to thank the colleagues in the plants around the world for their work and their commitment. Their expertise and passion in the production of our stars make the wishes of customers all over the world come true day after day.”

We’ll note that Mercedes is counting both Mercedes-Benz and Smart-branded vehicles toward its count of 50 million total. This 50-millionth car was also produced at the newly-minted Factory 56 that Mercedes detailed for us back when it introduced the new S-Class. Both the S-Class and electric EQS will be produced at this factory, the former of which is already rolling off the line.

Mercedes previously said the Maybach S 580 would go on sale in mid-2021, and with production starting now, it appears to be on track. There’s still no pricing available for the model, but the outgoing Maybach version of the S-Class started at $173,000, so expect it to be even more expensive than that.