After being spied for the first time just a few months ago, new images have emerged of the next Mercedes-AMG GLC 63 Coupe, and some of them give us quite a revealing look at the sporty interior. While this particular example was finished in white and wore different wheels, not much else about the partially camouflaged exterior differs from the black GLC 63 Coupe we saw previously. Because it was undergoing winter testing, it’s also wearing much chunkier Michelin tires. 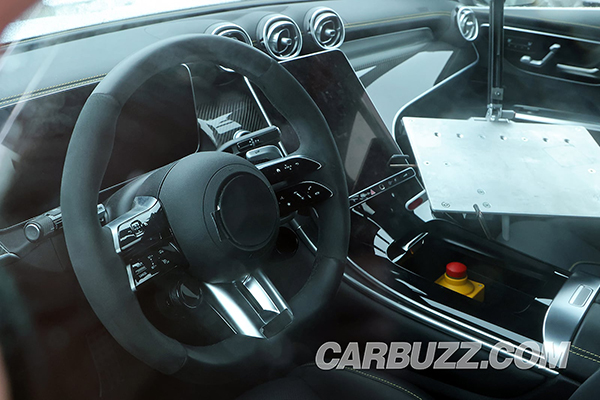 All the telltale AMG styling enhancements are there, such as the more prominent grille, quad-exit tailpipes in a square design, and a rear spoiler that draws the eye away from the gradually tapering roofline. But it’s not this car’s styling that is its primary talking point – that honor goes to the downsized four-cylinder power plant that will be inherited from the new C63.

While BMW proudly proclaimed that it would never build an M car with a three- or four-cylinder engine, Mercedes-AMG has been on a downsizing mission for some time now, and the GLC 63 Coupe you see here has not escaped the trend. Gone is the raucous V8 used before, and in its place will be a 2.0-liter turbo-four plug-in hybrid.

In the new C63, it’s good for 671 horsepower and 752 lb-ft of torque combined, so performance will be breathtaking. Our spies pointed out how strange it was to have a 63-badged AMG drive by that barely made a sound, as opposed to the ever-present burble of the V8 it will supersede.

Heading inside, we have our first clear look at the cabin of the new GLC 63 Coupe. The basic layout is shared with the all-new GLC SUV, which was revealed last year, but this high-performance model comes with extras like yellow stitching for the sporty bucket seats with their integrated headrests. 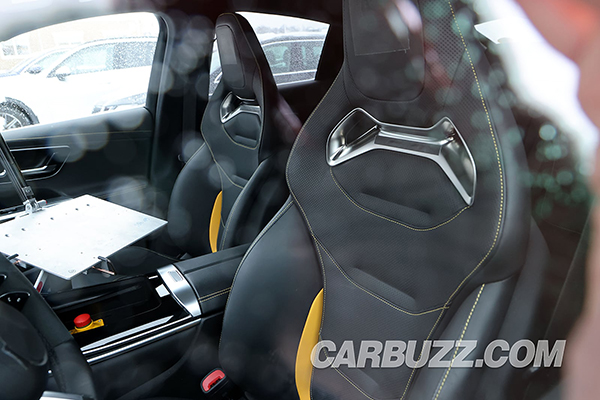 There is also plenty of shiny carbon fiber trim in evidence, and the steering wheel looks like it has Alcantara inserts to make it even easier to grip during hard cornering. As usual, the digital driver’s display is complemented by a second center touchscreen interface.

The new GLC 63 Coupe is expected to be revealed later this year as a 2024 model. It will once again do battle with the BMW X4 M.