Today on FRAME, we celebrate the legacy Mercedes-Benz G-Class through its elaborate production line. Also, check out how this German manufacturer is building its new electric saloon in its all-new high-tech facility in Germany!!

Inside Billion $ Mercedes Factory Producing the Mercedes G-Class by Hands

The German marque has tasked the Austrians at Magna Steyr to manufacture the G-Class, and it has been like this since its debut. Since the model has such a long production run, it has become one of the longest-produced vehicles in Daimler’s history, and it is surpassed only by the Unimog.

Production and development techniques have advanced since 1979, and Mercedes-Benz has adapted the G-Class to follow suit. The current generation of the G-Class is called W463 in the company’s internal records, and it has been made ever since 2018. It comes with more tech than ever, as well as improved comfort, pedestrian safety, and technology.

Just like in any other modern factory, the G-Class is made on a production line and goes through several stages before being completed. Unlike most modern vehicles, the G-Class comes with three lockable differentials, and it has a body-on-frame construction instead of a unibody.

In other words, the chassis is separate from the body, and the two are mated on the production line. Before the assembly process reaches that step, the assembled engine is mated to the gearbox, both are tested to ensure proper operation and are then installed on the frame.

Since the frame is not yet covered by the body, it gets all the drivetrain components installed with the engine and transmission. There are similarities in the process with more conventional passenger cars, as the latter also get their engine and transmission installed in the body alongside some components of the drivetrain, but the combo is mounted on a subframe in those cases. 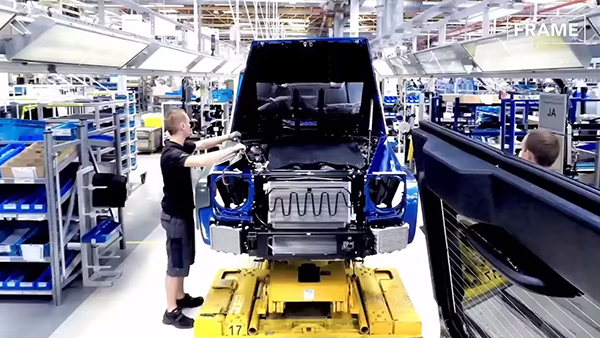 While every factory is different, there are many shared processes with other facilities, as most practices are industry standard. Many modern plants operate following principles like Kaizen, which were developed by the Japanese after World War II to eliminate redundancies, waste, and faults.

The idea is that every post on a production line only has the tools and the parts required for the specific job that needs to be carried out. The robots and the power tools placed at that post are adjusted for the specific tasks at hand, so there is limited room for error.

Moreover, the production process is carefully monitored, and inspections are often made to ensure that no mistakes were made. That is the reason some recall campaigns target vehicles made from one certain date to another, as it involves the moment when the potential error was discovered.

The folks at FRAME went and visited the Magna Steyr factory where the G-Class is being made, and they also featured the Unimog’s production process. The latter model is the one that has the longest production run in the Daimler portfolio.