This year, the brand with the star is focusing on two icons: Bernhard Langer and the Mercedes-Benz G-Class. Both have been top of their class for over 40 years. Time for a special tribute.

Mercedes-Benz pays tribute to Bernhard Langer with a special work of art.

German professional golfer Bernhard Langer is a two-time Masters champion and one of the world’s leading golfers in the 80s and 90s.

To honor his extensive career, Mercedes-Benz, as one of the main sponsors of the 2022 Masters Tournament, decided to create a very special, unique model. The three-pointed star brand collaborated with tape art artist Leah Abucayan for a colorful work of art on a 2022 Mercedes-Benz G 550. 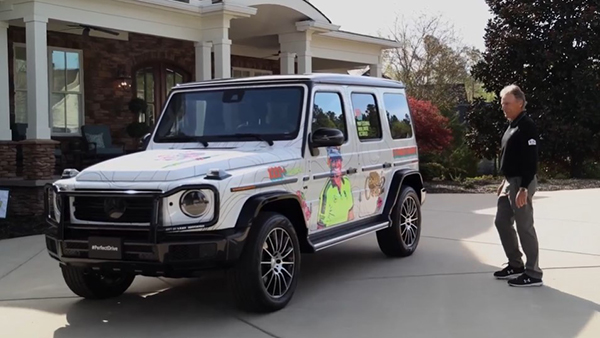 Bernhard Langer himself says: “I am delighted to receive this honor and am impressed by what has been created here. I have a lot in common with the G-Class. It already existed when I first competed here in 1982. Since then, we’ve both stayed true to ourselves, while at the same time always moving with the times and constantly evolving.”

Since the G-Class has been around as a civilian version since 1979, there is no better vehicle to honor the veteran golfer. The tape art on the white G 550 features several nods to Langer’s career, including his picture on the driver’s door and spare wheel case on the rear of the off-roader. Langer even pokes some fun at it, saying he looks better there than in real life.

The professional golfer will be pulling up to Augusta in style this weekend.