I cant believe someone hit and crashed into Stephen Sharer new dream supercar. You saw “MY NEW DREAM CAR REVEAL!! well know some scary old lady crashed her shopping cart into the Gwagon. Although this is very similar to what happened to lucas and marcus dobre brother twins when someone hit their ferrari and left a note and this is similar to the Ace Family when someone hit ace family $500,000 car.

SOMEONE HIT MY SUPERCAR… AND LEFT ME THIS NOTE

Some people grow very attached to their cars and, instead of buying a new one, they give the one they already have a makeover, making it look new and exciting again. One of those people is YouTuber Stephen Sharer, who just revealed the result of his G-Wagen’s latest upgrades.

For the project, Sharer collaborated with Car Effex, a car shop from Mantua, New Jersey. Initially, his off-roader had a holographic wrap exterior, but, since he had that wrap for a while, it displayed some normal wear and tear.

So, he decided to change the color, going for a violet purple Teck Wrap, with Gloss Light Green and violet purple wrap for the wheels, Gloss Light Green brake calipers with “Share the Love” written on them, and the same color for the badges. It also included his official social media handle on the rear side window, also in green.

But since he was already at an auto shop, he decided to add something new inside the cabin as well and got a Starlight Headliner. While the headliner is usually a feature on Rolls-Royce cars, many custom shops offer the option of getting one for any type of car.

The base of this upgrade was a 2018 Mercedes-Benz G 550 4×4 Squared. The rugged off-roader comes with a 4.0-liter biturbo V8 power unit that sends 416 horsepower or 422 ps and 450 lb-ft (610 Nm) of torque) to both axles via a seven-speed 7G-TRONIC automatic transmission. It sports a huge 17.7-inch (450-mm) ground clearance, three locking differentials, and portal axles that make it an off-road beast. 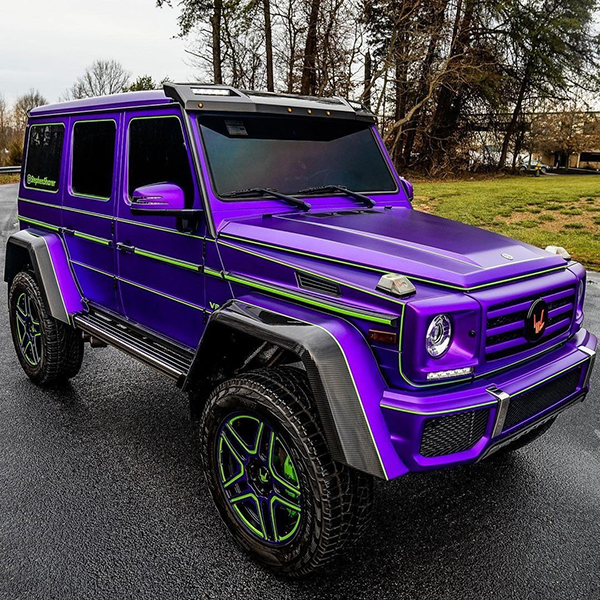 Following the wrap, Stephen Sharer was thrilled with his G-Wagen, or “Spy Wagon,” as he calls it. And he officially introduced it in a video on YouTube just a few days ago, on January 8.

But his excitement over the new vehicle was short-lived, as he announced in a new video posted on January 11. Because while he was out shopping, someone hit his newly wrapped SUV with a shopping cart.

The video shows the vlogger get to his car, where he had a note in the window from a passerby who witnessed the scene. The concerned citizen let the 24-year-old know that “someone ran their shopping cart into the side of [his] side fender,” and drove off.

Initially, he believed it was a prank because it took him several tours of the SUV to notice the damage, which was on the carbon fiber side fender from the driver’s side. But then he noted that the fender had cracked completely. Stephen also noted that one side fender costs $10,000 and, because of the damage, he has to take it straight back to the shop.

Luckily, there were some surveillance cameras around and he managed to get the footage of the incident, but he didn’t reveal if he went to the police. However, at the end of the video, Stephen asked his followers for advice on how he should proceed next, so, hopefully, he did give his insurance company a phone call. But that’s what we’d call extreme bad luck after the recent makeover.