In the electric car world, entering the range race means butting heads with Tesla. Mercedes-Benz is ready for a tussle, and it announced the EQS it’s putting the final touches on will offer more range than the Model S. 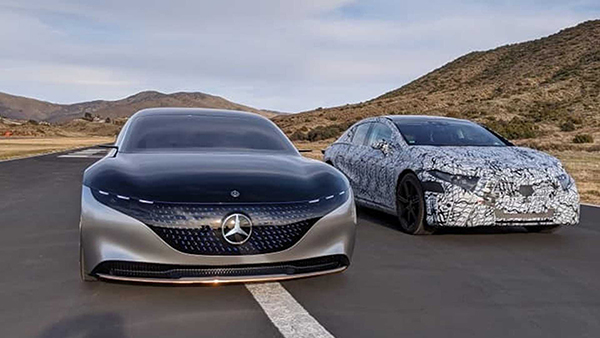 Speaking to shareholders and investors in July 2020, Daimler boss Ola Källenius confirmed the EQS will be able to cover over 700 kilometers between charges, a figure that converts to approximately 435 miles. If that figure is accurate, it will make the S-Class-sized sedan the longest-range series-produced electric vehicle in the world.

As of writing, the market’s mileage champ is the Model S, which got a 402-mile rating from the Environmental Protection Agency (EPA) in 2020. Not all testing cycles are created equal, however, and the figure quoted by Källenius was obtained using the Worldwide Harmonized Light Vehicle Test Procedure (WLTP). Whether the EQS drives further than the Model S on a charge depends on the number it receives from the EPA — at least on paper.

European officials haven’t put Tesla’s updated Model S to the test yet, so its WLTP number isn’t available. But, to add context, the electric Hyundai Kona earned a 279-mile rating in Europe and a 258-mile range in America. Or, look at Jaguar’s I-Pace: it launched with a 292-mile range across the pond and a 234-mile range here (a software update increased that figure). We wouldn’t be surprised if the EPA’s testing cycle gives the EQS a final range number in the vicinity of 400, which would put it about on par with the Tesla — and still ahead of most rivals.

In reality, range — like gasoline mileage — depends on a wide variety of factors. They include the temperature, the accessories being used, what’s in the car, how it’s being driven, and the battery management software.

Although additional technical specifications haven’t been published yet, it’s interesting to note the 435-mile range was announced by the 2019 Vision EQS concept that previewed the EQS, meaning its other numbers may make the leap from the show floor to the showroom floor as well. It carried a 100-kilowatt-hour lithium-ion battery pack that zapped a pair of electric motors (one per axle) into motion. It put 560 pound-feet of torque under the driver’s right foot, and performed a sub-4.5-second sprint to 60 mph, which isn’t bad considering it’s likely very heavy.

“It’s the first fully electric luxury sedan from Mercedes-Benz based on an all-electric architecture. This opens up entirely new possibilities, from the position of the batteries to the car’s design,” predicted Källenius.

Mercedes-Benz will introduce the EQS before the end of 2020, and the model will begin arriving in showrooms several months after its debut. Although it will be S-Class-sized, it will not be marketed as a replacement for the sedan, which is about to return for a new generation. Both models will be sold side by side. It’s reasonable to expect the EQS will cost more than the next S-Class, even with incentives factored in, due to the tech in it.