Electric seven-seaters are still few and far between, but the new Mercedes EQB does a convincing job of transporting the entire family in relative comfort – without any tailpipe emissions. The EQB is dripping with premium appeal, and while we’d like a little more range, faster charging tech, and, ultimately, a cheaper, front-wheel-drive entry model, the EQB is one of Merc’s most convincing electric car to date.

Slowly but surely, Mercedes is electrifying its entire range of combustion-engined cars. We previously revealed the brand’s plans to unveil 19 new models by 2024 – almost all of which will have a plug. The EQA, EQC and EQV are already paid-up members of the Mercedes EV fraternity, and the EQS will start arriving with customers very soon. Next in line is the EQB – a seven-seat, 250-mile family SUV based on the petrol and diesel-powered GLB.

The visual similarities are clear to see; like the GLB, its EQ sibling has more than a whiff of baby G-Wagon to its styling, with a high roofline and a boxy silhouette. In fact, the parallels don’t stop there – quality inside is excellent; the EQB uses a familiar dual-screen infotainment set-up, and the steering wheel is almost indistinguishable from that in the £100,000-plus AMG G 63.

But under the metal and behind the blanked off grille, the EQB is rather different. At launch there are two models to choose from – the 225bhp EQB 250 and the 288bhp EQB 350 we’re driving here. Both get a 66.5kWh battery and a pair of electric motors providing 4MATIC all-wheel drive. 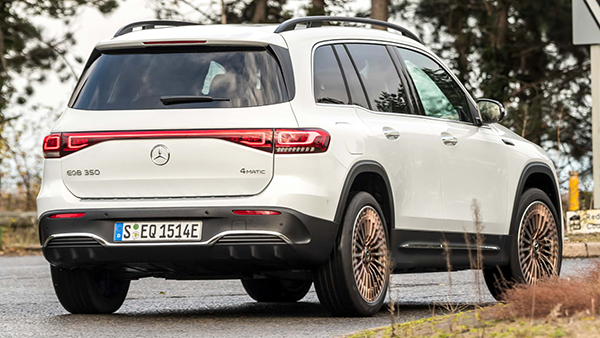 In reality, that gulf in performance is rarely felt on the road. Both get an identical 370Nm of torque, meaning each feels alert and punchy from a standstill; 0-62mph takes 7.7 seconds in the 250, cut to six seconds dead in the more powerful model. Overtaking is no trouble in either car, with instant acceleration right up to motorway speeds.

Handling is best described as safe and secure rather than particularly fun or engaging – although that has as much to do with the EQB’s shape and stature, as it does the steering or suspension. It feels perfectly predictable, however, and the plentiful torque is sufficient to put a smile on your face.

Refinement, on the whole, is very good, though as with any electric car, some sounds you might not normally notice are more apparent than they might be in a petrol car. What’s more, the EQB’s bluff shape means wind noise is quite pronounced at a cruise. The more expensive EQC successfully dials much of this out, partly through its sleeker shape, but also with the help of double-glazed side windows and extra sound deadening. 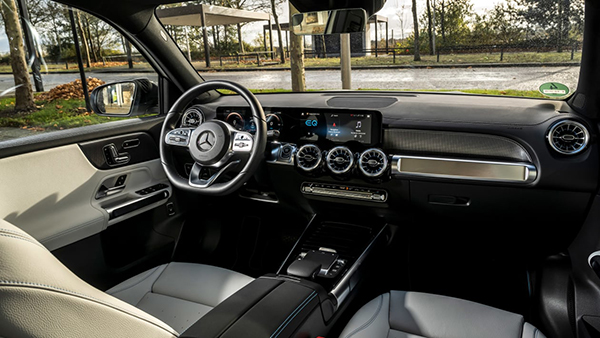 The other point of note is the EQB’s regenerative brakes. In their strongest setting, you can bring the car to a complete stop just by lifting off the accelerator, while a coasting mode makes for simple, efficient motorway driving. The adaptive set-up, in our experience, isn’t as clever as we’d like, but if you prefer to slow the car like you would normally, you’ll be pleased to know that brake pedal feel is vastly improved over the EQC.

But it’s likely the main reason you’ll be considering one of these is due to the fact that every car (our European model was a European-spec five-seater) comes with seven seats. Furthermore, even the rearmost row gets ISOFIX, so while they may not be suitable for adults – we’ve tried the seven-seat car before – you can drive comfortably knowing your most precious cargo is strapped in as safe as can be.

Of course, if you’re going to make regular use of those two extra chairs, then you’re not left with much in the way of boot space. But fold down those seats and things improve dramatically, with the EQB offering 465 litres in its five-seat configuration or 1,710 litres with the two rear rows folded flat. 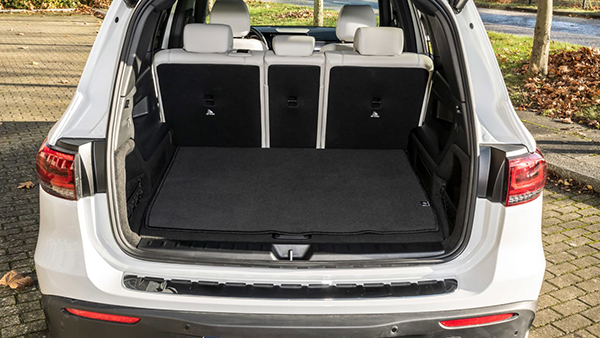 Space in the middle row is adequate even for taller adults, though the positioning of the batteries under the floor means your knees sit quite high. We found there’s plenty of head room though, despite our car’s two-part glass roof.

You’ll need to step up to the pricier of the two trims to get that panoramic roof, though it’s the basic AMG Line we’d recommend. These models come with 18-inch wheels, LED lights, 64-colour ambient lighting and lovely twin screens inside – including with which, are Apple CarPlay and Android Auto, plus sat-nav and a reversing camera. 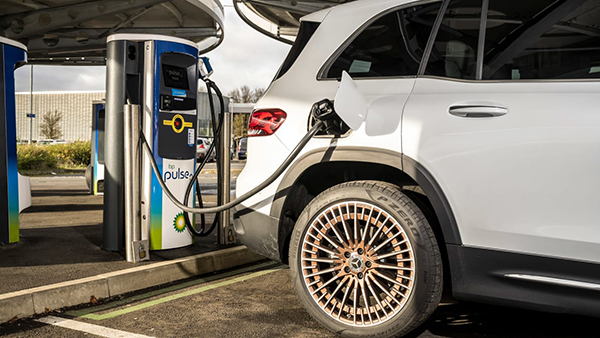 But while there are no incentives to be had at the point of purchase, the potential for dramatically reduced running costs can be realised almost immediately after taking delivery. As is the case with all electric vehicles for the time being, company car drivers will pay just one per cent Benefit in Kind tax for 2021/22, rising to just two per cent the year after. There’s no road tax (VED) to pay, and if you can charge at home, you’ll save a fortune on fuel bills.

Mercedes claims the EQB will return a range of between 250 and 257 miles depending on spec – with the bigger wheels of the AMG Line Premium model knocking almost three per cent off the SUV’s range. In reality though, certainly on colder days, that range is likely to hover around the 200-mile mark. If this works for you, then the EQB is an appealing package.

Charging is competitive, if not class-leading. The EQB has a 100kW maximum rapid charge rate, falling shy of the Volvo XC40 Recharge’s 150kW peak. However, it still means a 10-80 per cent top-up in 32 minutes, which should be sufficient for between 160 and 200 miles of range depending on your driving style and other external factors. Charging at home via a 7kW wallbox is possible in around 11 hours; those with three-phase electrics can reduce that to five hours 45 minutes.