Electric drive really suits the EQB. It’s smooth and refined – and surprisingly swift, too. True, it’s compromised when it comes to space in the rear, but seven-seat capability is still a bonus, although you’ll probably have to pay for the privilege. However, with its solid range, charging options and technology, the EQB is yet another good pure-electric offering from Mercedes. 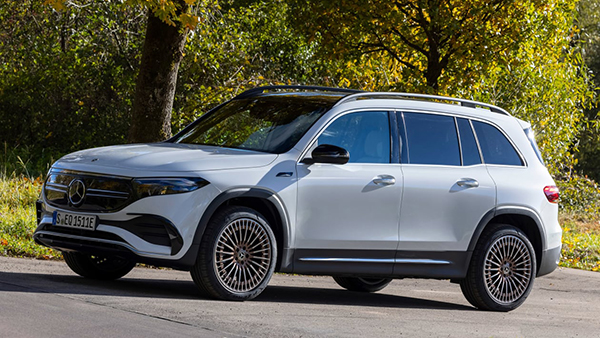 Mercedes is serious about delivering electrification for the masses, launching this EQB all-electric seven-seater SUV to follow its compact EQA model. Of course, cars like the EQS and EQE offer luxury at the higher end of the company’s range, but at a price; models like this EQB are more affordable.

As the name suggests, the new car is based on the brand’s combustion-engined GLB SUV. But there are some subtle styling differences – such as the smoother front grille and full-width rear light bar – that set the two cars apart and mark the EQB out as an EV. They help cut aerodynamic drag and boost range, but more on that in a moment.

Like the GLB, the EQB has seven seats, even if the third row is still on the cramped side here. Access also isn’t the easiest and clambering through the door apertures will be easier for children than adults. 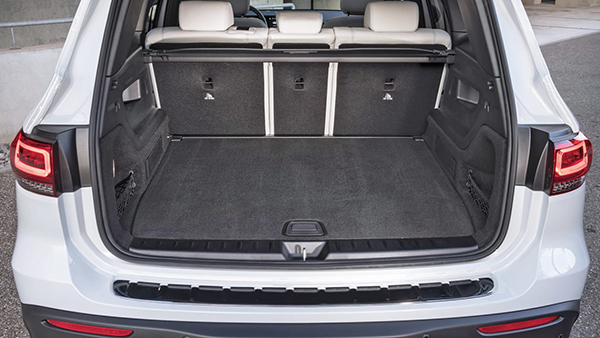 Space in the middle row is fine, though, and with the rear seats folded away into the floor, you have 465 litres of boot capacity to play with. If you fold both rows down, there’s a maximum 1,610 litres, so practicality is fair as well. The main issue is that the rather cramped space in the EQB’s rearmost seats means it’s better used mainly as a five-seat car, and an occasional seven-seater, than a full-on SUV with space for seven.

There are two powertrains on offer, both fed by a 66.5kWh battery. The first is the EQB 300 4Matic, which delivers 225bhp from its pair of electric motors, one driving each axle. It means the 0-62mph sprint takes 8.0 seconds, while stepping up to the EQB 350 4Matic drops this time to 6.2 seconds thanks to its increased power output of 288bhp. In each model, the top speed is limited to 99mph.

We sampled both versions on our test drive and think that the cheaper EQB 300 offers enough performance, with the instant torque delivery helping whisk this boxy SUV along at a perfectly decent pace. 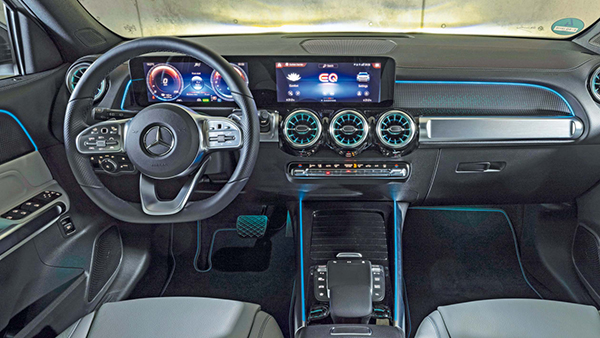 If acceleration and performance aren’t as important, a single-motor, front-wheel-drive model will arrive next year, and that should also offer even more range. Mind you, both 4Matic models have a WLTP-certified range of 260 miles, which is still respectable.

DC rapid charging at up to 100kW means the EQB has the same capability as the EQA, so an 80 per cent top-up takes 30 minutes. Using the 11kW on-board charger, a recharge at home will take five hours and 45 minutes.

The car’s regenerative braking system can be used to pump energy back into the battery when slowing down, too. In its highest setting there’s a good degree of retardation, meaning you can drive around mostly using only the accelerator.

On the move the EQB is refined and swift, rolling along smoothly, while the extra mass of the battery means the chassis moves in a softly controlled way rather than with rigid, short movements. It encourages a calm and relaxed driving style, which is perfectly in keeping with the EQB’s ethos. 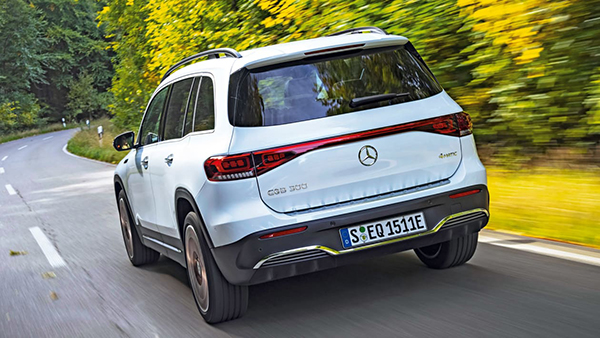 Although the EQB has pretty strong acceleration for a seven-seat SUV, the car’s relatively high kerbweight – added to by the weight of that battery, which is still relatively high off the ground, even if it is sandwiched in the car’s floor – means the EQB isn’t the most dynamic machine to drive. However, it offers good traction thanks to its four-wheel-drive system and plenty of reassuring grip.

The tech underneath is reflected by the interior, which with its pair of bright, sharp digital displays. They help to give the EQB’s cabin a premium look that’s backed up by the choice of materials inside.

The infotainment system is familiar from other Mercedes models, and it works well, offering plenty of features and good connectivity, including Apple CarPlay and Android Auto. The touchpad is relatively responsive, but you can also use the screen itself to navigate around the menus or input data; it’s nice to have the choice.