When the Mercedes-AMG EQS arrives at US dealers later this spring, it will start at $148,550. That price includes the $1,050 destination charge and a lot of power from AMG’s first battery-electric production model. 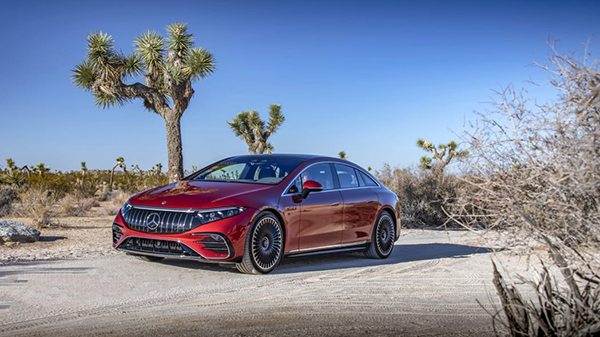 Mercedes-AMG announced pricing information for its version of the Mercedes-Benz EQS, a big, futuristic-looking sedan marketed as an electric alternative to the S-Class. Due out as a 2022 model, the AMG-branded EQS costs nearly $45,000 more than the entry-level model.

At launch, buyers will have two trim levels called Exclusive and Pinnacle, respectively, to choose from. Pricing starts at $148,550 including a $1,050 destination charge and two years of unlimited fast-charging on the Electrify America network of charging stations, but excluding any available government incentives. For the money, motorists are treated to a relatively long list of standard features that includes the MBUX Hyperscreen (which fuses three displays under a 56-inch piece of curved glass), leather upholstery, heated and ventilated front seats with a massage function and a Burmester surround-sound system. Pricing for the Pinnacle hasn’t been released yet.

For context, the Benz-branded EQS 450+ starts at $103,360 including the destination charge, and the mid-range EQS 580 is priced at $120,160. If you prefer your six-digit luxury super-sedan with a big V8, the AMG-massaged evolution of the current-generation S-Class is around the corner, and unverified rumors claim that it will adopt a performance-oriented gasoline-electric plug-in hybrid drivetrain.

Power for AMG’s EQS comes from a pair of electric motors that draw electricity from a massive, 107.8-kilowatt-hour lithium-ion battery pack to zap the four wheels with 649 horsepower and 700 pound-feet of torque, though an overboost function briefly increases those figures to 751 hp and 752 lb-ft, respectively. Sprinting to 60 mph from a stop takes 3.4 seconds, while top speed is electronically limited to 155 mph.

Mercedes-Benz dealers across the nation will begin receiving the AMG EQS late in the spring of 2022.