Technically, the EQS AMG remains the “fastest” Mercedes EV with a limited top speed of 155 miles per hour. In an imaginary race on the Autobahn, it will leave the EQE AMG and its 149 mph top speed behind. However, the EQE is the quickest electric Merc, hitting 60 mph in 3.2 seconds, 0.2 quicker than its bigger sibling. More importantly, the EQE is smaller and behaves better in dynamic situations because of it.

Mercedes-AMG has a history of producing some genuinely brilliant cars. Loud and full of excitement, AMG products are emotional overload. So when I was told that I would be traveling to Colmar, France, to drive a new AMG with over 600 horsepower, my brain prepared for such an experience.

After driving the Mercedes-AMG EQE, though, my takeaways could not have been more different from anticipations. This all-electric sedan is a serene, plush highway cruiser that can lower your heart rate just as well as it can raise it. This is the reality for an electric AMG.

Gotta Blast
Technically, the EQS AMG remains the “fastest” Mercedes EV with a limited top speed of 155 miles per hour. In an imaginary race on the Autobahn, it will leave the EQE AMG and its 149 mph top speed behind. However, the EQE is the quickest electric Merc, hitting 60 mph in 3.2 seconds, 0.2 quicker than its bigger sibling. More importantly, the EQE is smaller and behaves better in dynamic situations because of it.

While its general shape and design are remarkably similar to the EQS, the EQE is shorter by 10 inches overall. The wheelbase is also chopped by 3.5 inches, which means there is a smaller battery pack. This car uses a 96.0-kilowatt-hour (usable capacity), rather than the 108-kWh unit (usable capacity) in the EQS.

Mercedes claims a WLTP-certified range of 327 miles, so it’s safe to assume an EPA number shy of 300. Peak charging happens at a rate of 170 kW with 112 miles of range coming in a claimed 15 minutes. We all are looking forward to seeing the full charging curve on this car, hopefully, later on, this year.

Although the battery pack is the same as in the standard EQE variants, the motors are AMG-specific – one on the front axle and a slightly larger one on the rear. With unique inverters and higher currents, the motors produce more power. They’re also optimized for repeated acceleration runs with improved cooling and heat-resistant ceramic coating. 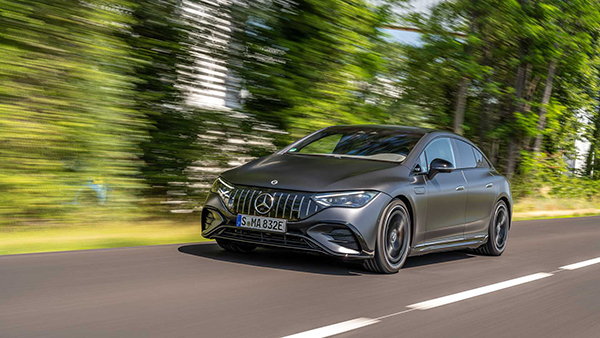 Incorrect Expectations
Within the first 30 seconds of dropping my jetlagged hiney in the EQE, my preconceived notions about hard-core AMG models began to fade away quickly. The seats are unbelievably comfortable. No sport buckets with thin padding here; these chairs are covered in plush Nappa leather and offer heating, ventilation, and massage.

Where carbon fiber is typically all over the place in an AMG interior, it’s used sparingly inside the EQE. That’s also because the enormous “Hyperscreen” glass panel takes up the entirety of the dash, but even in other places, the materials lean more toward luxury than sport. If we’re playing apples to apples against an E63, this cabin feels much more premium.

After fumbling to find the start/stop button (it’s in the center console), I pressed it and heard the AMG roar to life. No, not like that. Like this. And away I drove in near silence, with only the faint sound of Taylor Swift in the background courtesy of my playlist.

To my surprise, the first thing that struck me in the EQE AMG is the Maybach-like ride quality. I had a similar experience when I drove the EQS 580 last year, but assumed that with the different AMG air suspension that this car would be stiffer. On one hand this is without a doubt the best riding AMG vehicle that I have ever driven. It really does glide over the road with a floating sensation that never subsides. The downside is that it feels very disconnected for a performance car.

Some of the excitement returns the moment you smash the accelerator. Brought even more to life by ridiculous noises from the speakers (watch the video), the EQE gathers pace at an alarming rate. By my unofficial estimate, the Taycan Turbo and Audi RS E-tron GT both feel quicker, but this AMG is still up there with the best of them. And like both of its German rivals, the EQE doesn’t run out of steam as the numbers climb – keep your foot in it and jail-time speeds happen in a matter of seconds.

On curvier tarmac, the EQE corners with surprisingly neutral characteristics, considering its cushy suspension and 5,400-pound curb weight. You’re aware of the car’s mass at all times, but the rear-axle steering helps it drive smaller than it is in reality. The Michelin tires also provided decent grip, despite having a lower resistance compound for maximizing range.

Ceramic brakes are an interesting proposition on a vehicle like this, one that presumably won’t see a track all that often – if ever. With regeneration activated, the car physically moved the brake pedal forward, even though my foot didn’t touch it This phantom movement during deceleration felt strange and made it harder to gauge the pedal when needed. With regen turned off, everything went back to normal and I could lean completely on the ceramics. But deactivating the feature in an EV for the purpose of natural brake feel is a bad trade-off.

The New AMG
This is the first all-electric AMG I’ve driven, and I admittedly came at it with expectations that more closely align with combustion cars. The EQE AMG is a very capable performer, but it’s missing some of the edge that’s historically synonymous with so many fast Mercedes products. In place of that sharpness is a more comfortable, more luxurious car that can still put a smile on your face.

As an electric vehicle, the EQE-AMG is fantastic with solid range, ample acceleration and a tech-indulgent cabin. It would make a wonderful daily driver and still get the job done on a weekend joy ride. But as an AMG flag bearer, the EQE resets the bar on what we should anticipate from the brand going forward.