The EQE combines plenty of power and stunning performance with a long range and good charging capability. The handling is also sound for a big EV that weighs this much, and we have no complaints about the refinement or the level of on-board technology either. However, at the price this top-spec AMG EQE model is likely to command, quality is not quite up to the level we expect from Mercedes – or where it needs to be at this point in the market. 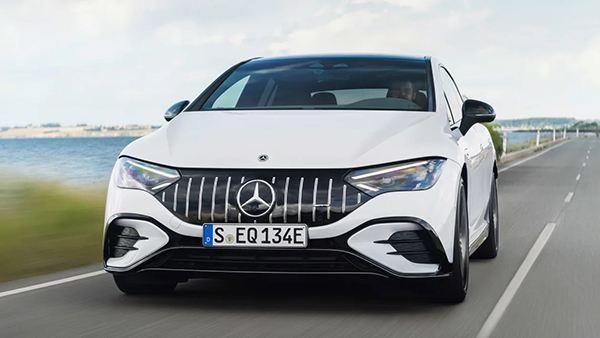 Mercedes’s near-silent performance revolution continues with this, the EQE 53 from in-house tuning department AMG. It’s the more potent of two AMG-branded EQE models, sitting above the 43 version of the company’s mid-size electric saloon.

The 53 badge signifies a dual-motor powertrain that kicks out a colossal 617bhp and 950Nm of torque even in standard form. But if you opt for the AMG Dynamic Plus package, the powertrain’s output rises to 678bhp and 1,000Nm of torque.

Impressive stats, certainly, but then the EQE 53 weighs 2,525kg, so it needs a fair amount of grunt to achieve the performance an AMG-badged car in this class must have. On that front, in standard form the EQE 53 will sprint from 0-62mph in just 3.5 seconds (it’s 0.2 seconds faster with the Dynamic Plus pack) and hit 136mph flat out. 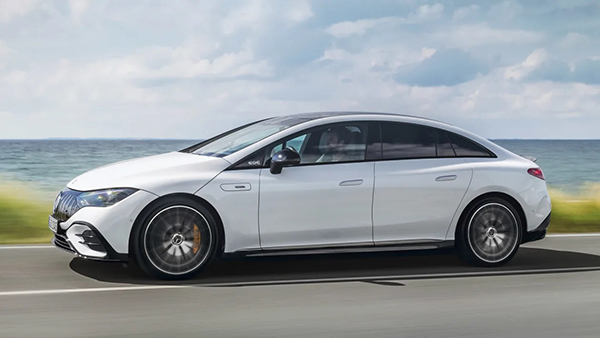 That power is delivered courtesy of a 90.6kWh lithium-ion battery pack, but use the full performance and you’re unlikely to get anywhere near the claimed range of 322 miles. If you can find a chargepoint that’s capable of pushing the EQE 53’s 170kW DC capability, a 10-to 80-per-cent top-up takes 30 minutes, which is pretty common for any electric car, regardless of its class and performance.

On the move, the EQE feels incredibly rapid. It will romp forward with alarming aggression, but thanks to the way the electric powertrain works, the surge of acceleration is always delivered smoothly.

While you won’t get used to that prodigious pace on a first drive, the brake regeneration is easier to get to grips with. You intuitively drive around just modulating the throttle rather than touching the brakes. Besides, you’ll need to have maximum recuperation engaged if you want to get close to the Merc’s claimed range. 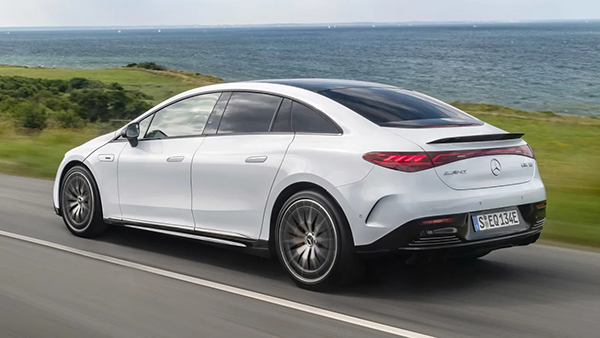 Thanks to the EQE’s optimised AMG Ride Control+ air suspension and rear-axle steering, it has the chassis technology to cope with the car’s huge performance. As a result, the Merc rides relatively well and changes direction with reasonable agility given how much it weighs.

However, perhaps of more benefit is the ability of the rear-axle steering to reduce the turning circle, which makes the EQE more manoeuvrable in tight spots.

Although this is a smaller vehicle overall than Mercedes’s EQS flagship, it’s still a significant size, at just under five metres long. Yet despite this, boot space stands at just 430 litres, which isn’t exactly the biggest, plus the EQE’s teardrop shape and heavily tapered roofline mean headroom in the rear could be better. At least there’s decent legroom in the back seats. 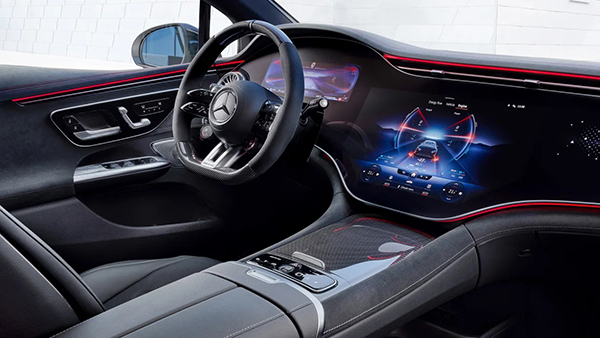 The car’s sleek design also means a low drag coefficient, which boosts economy and aids refinement, because there’s not much wind noise inside. The EQE 53 features AMG’s trademark vertical slats in its blanked-off front panel, too, while the sports seats balance comfort and support.

However, we have some issues with material quality inside this range-topping version of the EQE, because some of the plastics and materials feel very plain. There’s definitely room for improvement.

The same can’t be said of Mercedes’ Hyperscreen infotainment set-up, which is very impressive. It combines three panels beneath one sheet of glass that spans the full width of the cabin. Running the latest MBUX software, it responds quickly and is packed with features. But then, you’d expect the EQE 53 to come with pretty much everything as standard, given that prices are expected to start from significantly more than £100,000.