Shortly after announcing the starting price of the EQE 53 electric sedan in Germany and detailing it, Mercedes-AMG has done the same for the EQE 43. The lesser model doesn’t feature as much gear as its sibling, lacks in the power department, and it is not significantly cheaper. 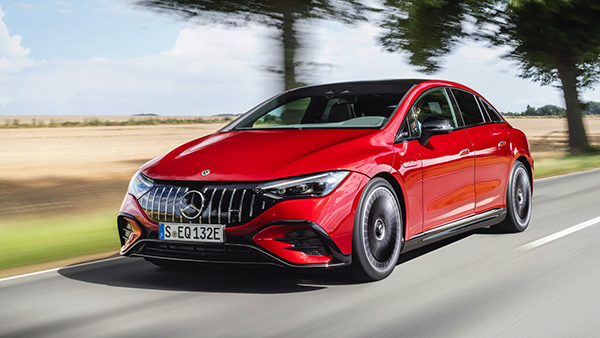 It features the same driving modes as the EQE 53, namely the Slippery, Comfort, Sport, Sport+, and Race Start, albeit the latter lacks the Boost function. Like its better-equipped sibling, the EQE 43 gets rear-wheel steering too, for superior handling and reduced turning radius. The AMG Ride Control air suspension is also included, and it has dual-circuit hydraulic brakes and electromechanical speed-sensitive power steering with rack and pinion.

The wheels measure 9.5×20 inches at the front, and 10.5×20 inches at the rear and come shod in 265/40 and 295/35 tires, respectively. As far as the actual gear goes, it has most of the bells and whistles found on the upper grade. The Hyperscreen, with its large curved display stretching across the entire width of the dashboard, is optional. In Europe and China, the screen in front of the passenger can show dynamic content during driving, a function that won’t be available in the United States, for safety reasons.