The world of Autobahn top-speed runs is often oversaturated with high-horsepower cars that reach unbelievable speeds. And that’s great, but sometimes it’s important to savor the journey when it comes to high-speed driving. That’s why TopSpeedGermany recently took a Mercedes-Benz E-Class E220 wagon for a spin on the de-restricted Autobahn.

While the 2003 Mercedes-Benz E-Class Wagon in the video may only have a 150-horsepower (112-kilowatt) turbodiesel 2.2-liter four-cylinder engine, it puts the power down in a very unique way. As we’re not physically in the car ourselves, we can only say so much, but it’s clear that this powerplant is silky smooth and determined.

From a sensory standpoint, we’ve never experienced such a relaxing top-speed run. While you would expect a lukewarm soundtrack from a diesel, it does seem to provide surprising performance. It hits an easy 127 miles per hour (204 kilometers per hour) before encountering traffic, and once the clog clears, the journey back to 124 mph (200 km/h) is over before you know it. 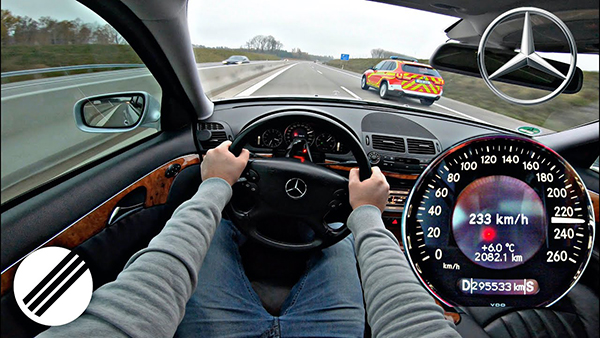 Sure, you could argue that the car is so underpowered that its top speed is easier to reach, but that doesn’t take away the fact that these smaller turbodiesel engines have such a unique powerband. As many of the runs were hindered by traffic, it’s unclear if the German automobile could go faster, but these vehicles are clearly more concerned with range than performance.

Regardless, the Autobahn remains one of the only roadways on earth where you can take your car to its limits. Obviously, it’s not a free-for-all out there, but the ribbon of tarmac remains one of the automotive wonders of the world.