A full review and test drive of a well kept Mercedes 300T, the S124 wagon platform of the venerable W124 series. It’s safe to say that the W124 was groundbreaking, and set the standard for cars that would come afterward. It’s quite possibly – probably, even – the best car ever built.

The Best Car Ever Made? Probably. The Mercedes-Benz W124 Was The Most Influential Modern Era Car.

Mercedes-Benz E-Class W124 remained in production until 1997. Meanwhile, the premium car company built estates, coupes, cabriolets, sedans, rolling chassis and long-wheelbase rolling chassis. The model touched American soil in November 1985 and remained there until 1995. It was the representation of discretion, luxury and elegance in a world dominated by muscle cars.

It was 1993 when the model series first received the E-Class designation. Mercedes chose to build the model at its plant in Seville, Spain. 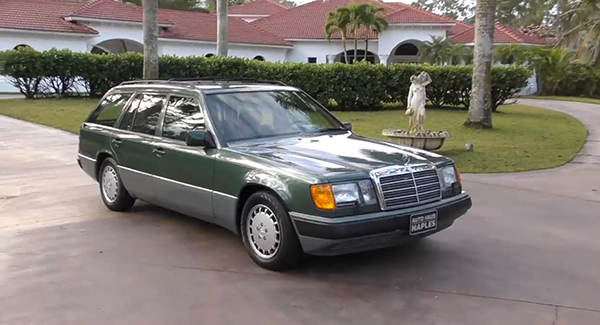 Iconic Mercedes-Benz W124, most influential car?
Spacious, durable, liable and groundbreaking. These were the characteristics of the W124. These were the factors that made some believe that it is the best car in the world. If the classification may be subjective, the classic E-Class was for sure a standard for models to come. “It was the most influential car of the modern era”, they say about the iconic automobile. “But it’s not infallible – to own one is to own a very drivable classic, but it won’t happen without maintenance and repairs”, they point out.

In the latest vlog, Curious Cars makes a full review of the 300T, the wagon with a 3.3-liter inline six, that developed 180 horsepower. It was quite an impressive output at the time. Back then it could accelerate from 0 to 60 mph as fast a Chevrolet Camaro and was capable of outpacing it by more than 10 mph on top speed.

The car in the video, that is almost an hour long, had a single owner for 34 years. The station wagon stretches its legs on the highway and seems capable of the same run as over three decades ago.