The mid-cycle refresh of the W203 Mercedes-Benz C-Class in 2005 saw the introduction of a more powerful AMG version of the compact vehicle. From C32 to C55, it paved the way for Merc to use Affalterbach’s new 5.4-liter naturally aspirated V8 then – an evolution of the eight-pot mill found in the old E-Class.

In the C55 AMG, the V8 made 362 horsepower (270 kilowatts) and 380 pound-feet (510 Newton-meters) of torque, which were respectable numbers at that time and in its class. These figures were sent to the wheels via a five-speed automatic with AMG Speedshift.

Performance numbers were impressive then, allowing the C55 AMG to sprint from zero to 62 miles per hour (100 kilometers per hour) in 4.7 seconds. The top speed was electronically limited to 155 mph (250 km/h).

In this top-speed run video, courtesy of AutoTopNL, a C55 AMG Wagon stretched its decade-old legs on the unrestricted reactions of the German Autobahn. It was evidently a cold day, but the long-roof rocket didn’t back down. In fact, it reached the factory-rated top speed, with the GPS reading 250 km/h in one of its multiple attempts. 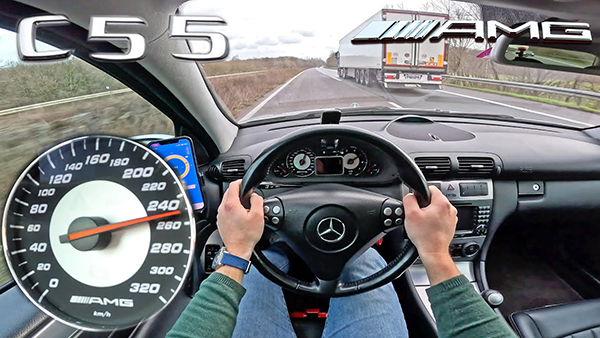 However, it appears that this car can do more and its limiter has already been unlocked.

Whether this is true or not, we won’t know for sure. But one thing’s confirmed: the C55 AMG is still a formidable model to have despite its age and probably among the top Mercedes C-Class you should keep an eye out for on the used car market. Just make sure that the engine’s in tip-top shape when you get one.