The 2023 (and 2022) Mercedes-Benz C-Class just scored a Top Safety Pick+ award from the Insurance Institute for Highway Safety. This is the first time the redesigned C-Class has been independently crash tested, as the NHTSA has yet to rate it. 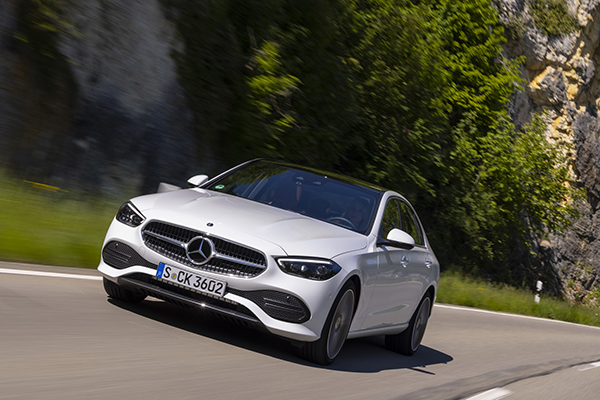 The Insurance Institute for Highway Safety (IIHS) has granted the 2022 Mercedes-Benz C-Class the Top Safety Pick+ award – the highest commendation from the independent, nonprofit scientific organization.

According to the IIHS, the redesigned Mercedes C-Class has met all the requirements for the highest award with two variations of headlights and two different front crash prevention systems available.

The IIHS gave the C-Class’ standard static LED headlights a good rating. However, the optional curve-adaptive headlights, supplied with the Digital Light Package, are rated acceptable. To get the highest honor, Good or Acceptable ratings should be available across the range.

To get a Top Safety Pick award from the IIHS this year, the agency said that the vehicle should earn Good ratings in six crashworthiness evaluations. These crash tests include driver-side small overlap front, passenger-side small overlap front, moderate overlap front, original side, roof strength, and head restraint tests. The car should also have an Advanced or Superior front crash prevention system in both the vehicle-to-vehicle and daytime vehicle-to-pedestrian evaluations.

The Mercedes C-Class is the latest to have been given the highest Top Safety Pick+ award this year, following the Toyota Tundra in September and the Hyundai Ioniq 5 in July. Earlier in the year, the IIHS announced the vehicles that got the highest awards for 2022, with the Hyundai Motor Group dominating the list.

Starting in 2023, the IIHS is set to introduce tougher award criteria for its testing. An updated side impact evaluation will occur at a higher speed and with a heavier barrier. There will also be a new nighttime pedestrian crash prevention test.