Mercedes debuted the new AMG C63 S E Performance a few months ago. It arrived with a massive change under the hood. Not only did Mercedes replace the V8 with a four-cylinder, the automaker also added an electric motor to compensate for the lack of cylinders. A new video from the Motorsport Magazine YouTube channel shows that the new car’s hybrid powertrain can still propel the sedan to 124 miles per hour (200 kilometers per hour) with ease.

The new AMG C63 features a turbocharged 2.0-liter four-cylinder under the hood. The rear-mounted electric motor assists the engine in making power, producing a combined output of up to 671 horsepower (493 kilowatts) and 752 pound-feet (1,018 Newton-meters) of torque.

When Mercedes revealed the car, it said that the C63 would be able to hit 60 mph (96 kph) in a claimed 3.3 seconds, which is quicker than the outgoing model. While the video only shows the C63 reaching just over 124 mph, the car has a top speed of 174 mph (280 kph) when equipped with the AMG Driver’s package. This is lower than the outgoing model’s 180-mph (290-kph) top speed. Helping the car accelerate is its all-wheel-drive system, a first for the model. 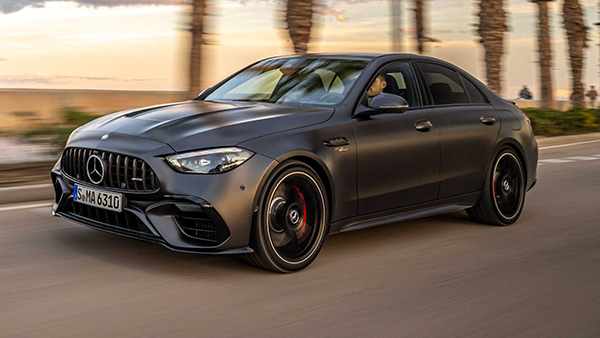 While the C63 got a massive update under its hood, the exterior didn’t radically change. Mercedes gave the popular high-performance sedan evolutionary styling tweaks, although the automaker revamped the cabin across the entire C-Class lineup. The C63 features a standalone digital instrument cluster behind the steering wheel and an angled screen mounted low on the IP stack for the infotainment settings.

Mercedes hasn’t said exactly when the new C63 would reach the North American market. The car is expected to go on sale early next year in global markets; however, interested US buyers will have to wait until the end of 2023 for the car to arrive for the 2024 model year. We don’t know its price, but it should start above the outgoing model, which commanded about $75,000 to start. Its tech-packed plug-in-hybrid replacement could start at over $80,000.