The appeal of the new C 63 S E-Performance all depends on how much you value the added practicality and flexibility delivered by its hybrid system. The inclusion of a battery and electric motor all at once lifts it above rivals like the BMW M3 Competition in terms of versatility – but there’s no escaping the fact that it also puts it behind them dynamically. 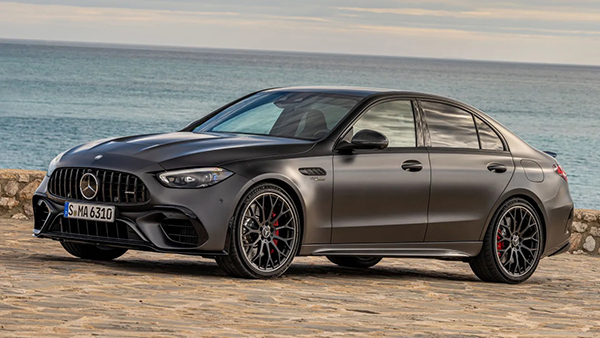 The appeal of cars like the Mercedes- AMG C 63, BMW M3 and Audi RS 4 has always been their blend of practicality and performance. Everyone loves the idea of a car that can be used for mundane motoring, but which is always ready for a bit of fun when the opportunity presents itself. It’s an alluring compromise.

But the balance of that compromise is a delicate one, and arguably it’s never been trickier. The scope of what is deemed necessary to make a vehicle practical is broader than ever, and often the elements involved don’t blend all that easily with the ideals of a performance car. As a result, this particular segment is undergoing a sea change in technical approaches.

Which brings us to the latest offering from Mercedes-AMG – and one which, sure enough, represents a major departure from what’s gone before. Gone is the V8 engine that has traditionally been found beneath the bonnet of a C 63, and in its place is a hybrid drivetrain that uses a turbocharged petrol motor with a mere four cylinders. It’s not just any old 2.0-litre petrol engine, though; it’s the most powerful in-line four in series production, developing a monstrous 469bhp.

What’s more, the ICE component – reworked, longitudinally mounted version of the unit from the A 45 – is supplemented by an electric motor which can either augment the four-pot for performance purposes, or, where the need or opportunity arises, take over propulsion duties entirely.

At 6.1kWh, the battery which supplies the power is not big (even though it encroaches somewhat on boot space, thanks to its placement over the rear axle) but it is clever. Mercedes has incorporated a direct cooling system in the battery that maintains an average temperature of just 45 degrees Celsius, allowing the fitment of higher-performance battery cells. As a result, the electric motor can add 94bhp of continuous power and up to 201bhp in 10-second boosts. 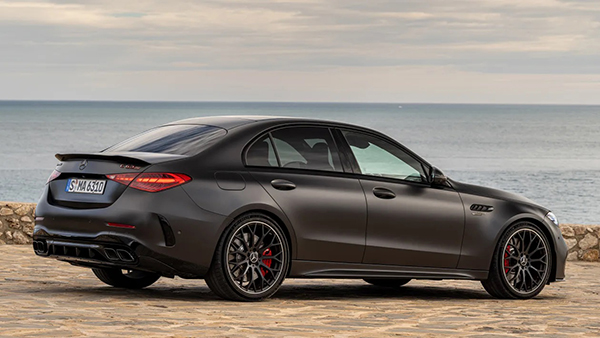 The battery also allows the C 63 S E-Performance to travel up to eight miles on electric power alone. That’s not a lot, admittedly, but it’s enough for a quiet cruise through a city or to get you well away from the neighbours early in the morning – a gesture that they’re likely to appreciate if you’ve had any of the previous C 63s.

What we found perhaps more impressive when driving in Comfort mode on the launch in Spain, was the way the car blends the two systems – electric and petrol – so seamlessly in everyday driving. It was easy to travel some distance on a motorway or fast A-road before realising that you were cruising along using electric power alone. The way the battery recharges quickly on the go was also very pleasing to note.

The downside to all this is the weight of the technology. On its own, the clever battery weighs a relatively reasonable 89kg, but the overall hybrid system adds about 250kg to the car’s kerbweight. And at 2,165kg, the latest AMG is a hefty car. The engineers point out that the distribution of the car’s mass across the platform is almost perfect, but such intrinsic weight nonetheless infiltrates all aspects of the C 63 S’s performance when it’s being driven enthusiastically.

You can sense the car’s bulk under braking, and you can feel the slight blunting of its performance under acceleration. With the dampers in their softest setting, the Merc feels at its happiest, and the ride is comfortable. But as you firm things up and ask more of the C 63 in the corners, you can once again feel the weight of the car as it struggles to contain and control its movements.

The rear-wheel steering does help to provide impressive agility in tighter corners, and the fundamental balance is pleasing. Traction is also impressive, with the 4MATIC all-wheel drive system deploying huge amounts of torque with minimal fuss. Even on track and in the car’s most aggressive Race mode, with the ESP in its looser Sport setting and the boost function engaged (the only way you can access the Merc’s full 670bhp), there was none of the hooligan nature you usually associate with older C 63s. 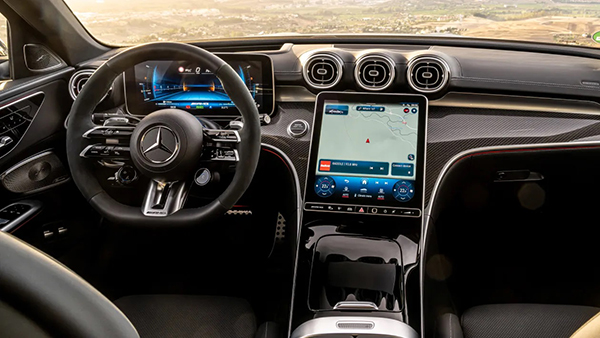 In many ways, then, this is a surprisingly easy car to drive, even when you’re pushing the limits of grip. However, there is always an impression of mass that is more in line with an S-Class than a C-Class. Curiously, the soundtrack from the four-cylinder engine puts you more in mind of a hot hatch than the big-engined premium saloon class where this model traditionally resides. It’s understandable, but a little disappointing in a car that is so expensive.

What’s not disappointing is the interior. It’s positively festooned with screens and buttons and is lit with a rainbow of mood lighting that seems to emanate from every orifice. The graphics on the screens all look very impressive and although there is an argument to say it’s all a little busy, it’s also hard not to be seduced by the details.

What’s more, there are myriad choices of layout for the digital instruments and head-up display. The steering wheel is a touch chunky and the seats, like their predecessors, felt a little firm initially, but overall this is another Merc to boast a slick, technical ambiance that is very modern and impressive.

The C 63 is a good-looking car from the outside, too. The front arches are more imposing than the rears but, although it seems a little counter-intuitive, that has been the way for some time with AMGs. Overall, it has a certain presence without shouting too loudly about its performance credentials.

In fact, it arguably looks most attractive as an estate, and there is a sense that this latest C 63’s particular mix of practicality and performance matches the image of the larger, roomier, body shape better.