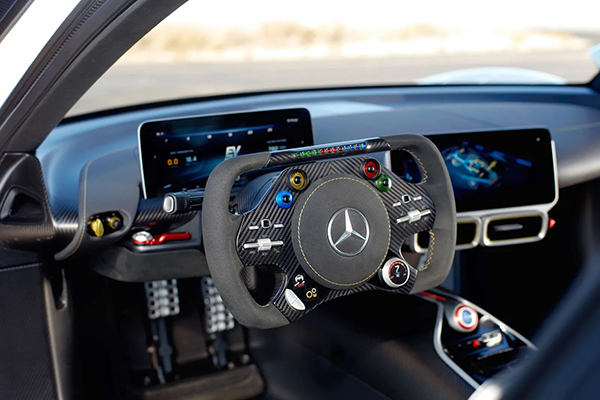 As expected, the steering wheel of the Mercedes-AMG One has a yoke shape, similar to that of F1. This is because just like in the F1 car, the steering has a very short demultiplication and it doesn’t take a full turn to negotiate a tight curve. Although it is made of carbon fibre, the steering wheel is quite heavy and incorporates the central airbag.

The controls at the bottom of the steering wheel have been carried over from the AMG models. The rotary switch on the bottom right selects drive modes including the famous Strat 2 (Qualifying mode) and the buttons on the lower left adjust the suspension settings.

In the central area you’ll find the traditional controls of the standard Mercedes models with a few small modifications in the left-hand area. So, you will be very familiar with the two mini-touches which control the multimedia system (right touch) and the digital instrument panel (left touch).

In the upper part there are only the typical race car controls: the one for high beam flash (blue); the one for DRS (gold) on the left side and the one for putting the gearbox in neutral mode (green) and for boost when passing (red).

Above is a LED bar that indicates the optimum time to change gears of the 8-speed dual-clutch automatic transmission. Surprisingly for a supersport car that’s supposed to be as light as possible, the steering wheel is electrically folding in two directions, in height and in depth.