A stock Black Series is already a privelege and life goal to drive on the Nürburgring, but a 880hp version? That has to be special. And it is. Watch how flawlessly and confident it is to navigate through the Touristenfahrten traffic.

Straight from the factory, the Mercedes-AMG GT Black Series is an incredibly impressive machine, including being one of the quickest cars in the world around the Nürburgring Nordschleife. The German tuner Opus aims to make it even better. This video includes a walkaround of the mean machine and two laps in heavy traffic around the ‘Ring.

The Opus-tuned AMG GT Black Series has revisions that push the engine output to 880 horsepower (656 kilowatts), versus 720 hp (537 kW) from the factory. The representative from the company only offers a few details about the tweaks. There’s a new exhaust that includes sport catalytic converters, and the redline is about 400 rpm higher.

The tuner actually has a 1,111-hp (829-kW) tune for the Black Series. The problem is that so much power is too much for this car on the Nordschleife. It would be fine for going in a straight line, but that’s not the point of this vehicle. 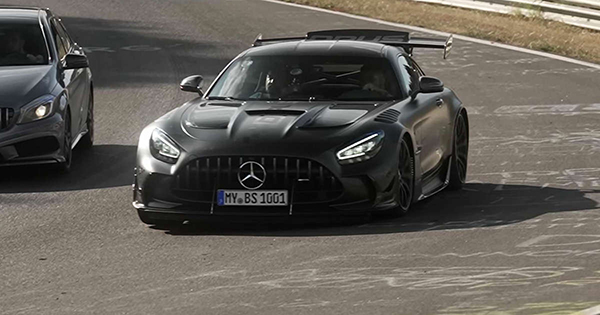 The suspension setup is different, but the shocks are the stock pieces. It rides on Michelin Pilot Sport Cup 2 R tires. This is the harder-compound version, which is better when driving in warmer temperatures. This rubber still only lasts around 20 to 25 laps around the track.

Lukas from Opus said this car already completed a 6-minute 46-second time around the Nordschleife. To put this into perspective, the stock AMG GT Black Series’ best lap was 6:43.61.

The host of the video takes the first lap around the Nordschleife. It’s impressive how quickly he gets used to the car. Clearly, this person is familiar with the ‘Ring, but he’s still able to be comfortable with passing traffic in tight confines after just a few corners.

Next, it’s Lukas’ turn. Unfortunately, his lap happens when the Nordschleife is full of traffic. Slower vehicles are supposed to pull to the right when faster traffic is before them, and the etiquette is to use a turn signal to indicate this. However, a lot of people during this run don’t do that. The situation causes Lukas to have a slower time, but he’s able to highlight his skill at negotiating a packed track.