It began with an idea because it seemed beyond reach. F1 technology for the streets. The ONE and only. The Mercedes-AMG ONE. Let’s look back on historic moments powered by one combustion engine and four electric motors – the ONE sensation on the legendary tracks of Nürburgring, Red Bull Ring, Hockenheimring and Nürburgring Nordschleife. To many more monumental memories with the future of Driving Performance.

Mercedes-AMG is celebrating the incredible ONE hypercar by looking back at its various record-breaking exploits this year.

AMG’s halo car, which will not be coming to the United States officially, dominated the headlines earlier this month when it blitzed the treacherous Nurburgring Nordschleife’s shorter course in a rapid 6:30.705 – eight seconds quicker than the previous record holder for road-legal production cars, a Manthey Racing Porsche 911 GT2 RS.

Setting the world record was an achievement many AMG employees had hoped for. Sebastian Fasche, Project Manager for Car Development, said the ONE’s record-shattering success at other racetracks gave the team a reason to believe it could dominate the Nurburgring.

“We have seen that we can set records on many racetracks. So, obviously, we were eager to set a new record at the Nordschleife,” he explained.

It went on to dominate at the Red Bull Ring too, where it set a record time of 1:26.846. Not a company to rest on its laurels, AMG then sent its hypercar to the Hockenheimring Grand Prix track. Here, the ONE managed to cover the 2.84-mile-long distance in a staggering 1:38.563.

But all of these are relative footnotes compared with the grueling Nordschleife. 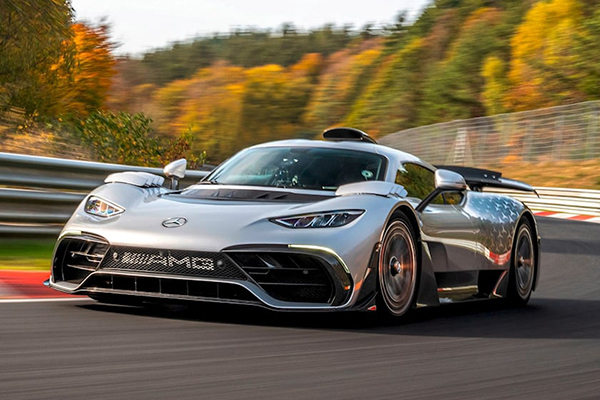 The entire team was focused on nothing but setting a new record. Mercedes-AMG driver Maro Engel, who piloted the hypercar to victory, explained that conquering the Green Hell was necessary: “We felt like it was the right place to come.”

“It was a struggle, it was a fight, but at the end of the day, we did it,” said Mercedes-AMG CEO Philipp Schiemer.

The Mercedes-AMG ONE is an engineering masterpiece, and its incredible capabilities are the result of years of development, rigorous testing, and an unrelenting desire to build the world’s first true F1-engined hypercar.

CEO Ola Kallenius joked that he and the board must have been inebriated when it approved the ONE: “I will have to go back to check the meeting minutes, but I’m sure we were drunk when we said yes.”

Bringing the ONE to fruition certainly was a tall order. Powered by a turbocharged 1.6-liter V6, engineers battled to get the F1-derived engine to comply with emissions regulations, to idle smoothly as much lower than its usual 5,000 rpm, and to stay relatively quiet (we’re told the noise in the cabin is cacophonous at full tilt). But perseverance saved the day, and the vehicle was officially revealed this year with a $2.8 million price tag.

Coupled with four electric motors, the small but potent V6 delivers more than 1,000 horsepower and a top speed of 217 mph. Push-rod suspension with adaptive damping at the front and rear axles, along with much aerodynamic trickery, permit the ONE to conquer just about any racetrack it wishes.

We would be surprised if these times are beaten anytime soon, but we’re guessing companies like Porsche and Ferrari aren’t too pleased with the AMG ONE’s capabilities. It may take a while, but it’s only a matter of time before something even faster. Until then, the ONE is arguably the king of lap records.