The 2023 Mercedes AMG GT coupe will share the same platform as the SL and is expected to come only as a hardtop coupe. It’s an absolute stunner and will come in two versions to start with – the base GT53 with 469 hp and the more powerful GT63 with 577 hp.

As if the German automaker’s nomenclature wasn’t sufficiently confusing, the second generation of the GT will grow softer due to SL underpinnings. The fast-shifting transaxle will be gone in favor of a torque-converter auto, the limited cargo area between the front seats and trunk will be used for two additional seats, AWD is on the menu, and the car will get porkier overall.

On the upside, spy pics of camouflaged prototypes reveal beautiful exterior styling inspired by the canvas-topped roadster. Based on these photographs, Marouane Bembli rendered the all-new GT as realistically as possible. On the other hand, the pixel artist better known as The Sketch Monkey used headlights from the GT 4-Door Coupe instead of the SL for his car.

Speaking of which, can you believe that Mercedes-Benz calls the family-hauling model a four-door coupe, although it’s a five-door liftback? As mentioned beforehand, the German automaker’s naming conventions are tremendously confusing. Turning our attention back to the GT, hearsay suggests the C192 codename rather than C191, as you’d expect from the successor of the C190. The reason C192 is preferred to the detriment of C191 is pretty simple: better alignment to the R232 Mercedes-AMG SL. 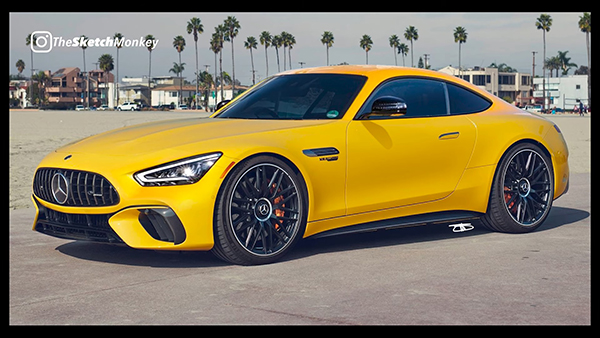 Expected to enter production in January 2023, the second-generation GT was photographed by the carparazzi with circular and trapezoidal exhaust finishers. The circular units may indicate four cylinders and rear-wheel drive (think SL 43), while the trapezoidal units may indicate eight cylinders and all-wheel drive (think SL 55 and SL 63). It’s not known if a straight-six engine will be added to the lineup at some point in the future, but still, it’s pretty obvious that Mercedes-AMG intends to electrify the 2+2 sports grand tourer.

I’m not referring to the four-cylinder turbo SL 43 that packs a Formula 1-inspired electric exhaust gas turbocharger. I’m referring to a plug-in hybrid V8 like the SL 63 S E Performance that was spied testing last month.

Similar to the GT 4-Door Coupe five-door liftback, this powertrain may be rated at 831 horsepower and over 1,033 pound-feet (1,400 Nm) thanks to a rear-mounted electric motor and a front-mounted V8 with a hot-vee setup.