Recent Mercedes-AMG GT Coupe spy shots captured the car with less camouflage than ever. New, unofficial renderings from Kolesa.ru peel away the few remaining patches in an attempt to predict the car’s final design ahead of its official debut. 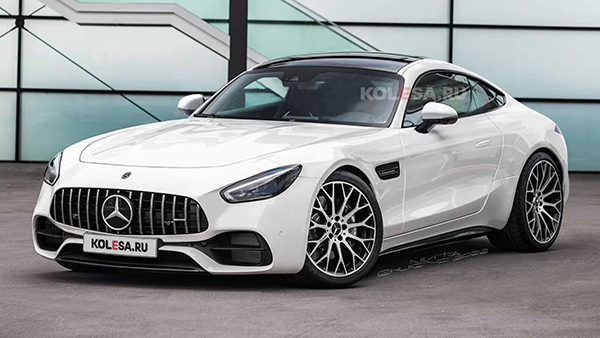 The AMG GT Coupe is mechanically related to the new SL, and it appears that the two will share some overall styling cues – at least in these renderings. The coupe lacks the SL’s soft top but retains its wide grille, swept-back headlights, and aggressive lower front bumper. The rear angle depicts the Porsche 911-fighter with slim and sleek taillights, a roof that blends into the rear fascia, and a chunky rear diffuser that houses the quad exhaust pipes.

Mercedes won’t reveal the car’s powertrain lineup until the debut, but they’re not a complete mystery. The AMG GT Coupe will feature several options, possibly including the turbocharged 2.0-liter four-cylinder also offered in the SL43. It produces 381 horsepower (284 kilowatts) and 354 pound-feet (480 Newton-meters) of torque in the convertible and would make a worthy entry-level trim for the model. 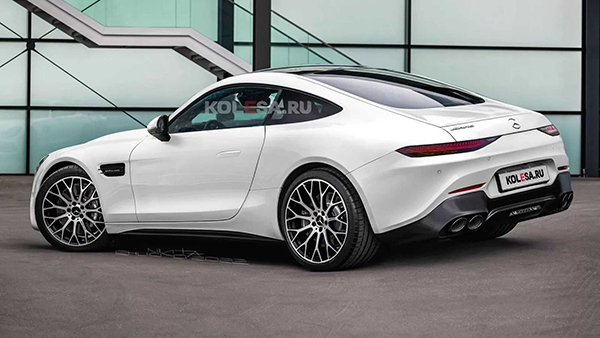 A plug-in hybrid powertrain is also likely. Previous spy shots captured the coupe with a charge port door on its rear bumper. It’s a mystery as to what setup will power the hybrid, but it could be the one from the new C63 S E Performance. It makes 671 hp (493 kW) and 752 lb-ft (1,020 Nm) of torque in that model. The automaker will also likely shove a good-old V8 under the hood for the AMG GT 63 variant.

Inside, the AMG GT and SL cabins will differ in layout, with the soft top featuring a 2+2 configuration compared to the two-seater Coupe. The GT will also feature a sportier driving experience thanks to its stiffer suspension, sharper steering, and improved handling, further separating the two.

Development should be nearly complete. The most recent spy photos we published showed the car with much less camouflage, suggesting that the reveal is imminent. We hope to see the car break cover in early 2023, with more potent flavors planned for the future. The two-door could borrow the electrified V8 from the GT 63 S E Performance that makes 831 hp (611 kW) and 1,084 lb-ft (1,470 Nm) of torque.