September 11, 2017. That’s when Mercedes-AMG unveiled its F1-engined Project One in concept form, prior to what was supposed to be the start of deliveries in late 2018. It’s mid-2020 and those 275 people fortunate enough to claim one still haven’t received their hypercars packing four-digit horsepower. They’ll have to wait some more as the first shipments will kick off sometime in 2021.

What caused the delay? You can imagine it’s quite tricky to adapt a 1.6-liter V6 engine of Formula 1 origins to a road car, with passing the emissions regulations being one of the biggest hurdles AMG had to overcome. Then there are the technologies ported from the 2017-spec F1 car, specifically the kinetic-energy harvesting-and-deploying electric motor (MGU-K) and the electrically spooled turbocharger (MGU-H). 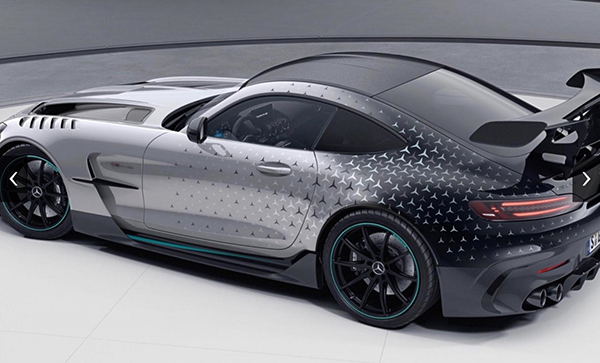 Ok, but what does it have to do with this AMG GT Black Series? Well, the boys and girls from Affalterbach have developed a special version of their sixth BS model exclusively for future owners of the hypercar. German magazine Mercedes-Fans is reporting this decision was taken to soften the blow caused by the multiple delays that have plagued the hypercar’s launch.

While pricing for the regular AMG GT Black Series has not been revealed yet, it is believed the P One Edition costs an additional €50,000 or about $57,300 at current exchange rates. It takes inspiration from the Mercedes AMG F1 W10 EQ Power+ race car used in the 2019 F1 season, with a two-tone livery with teal accents inside and out as a nod to Petronas, the F1 team’s title sponsor.

€50,000 is a hefty premium to pay, but that shouldn’t be much of a problem for AMG One customers seeing as how the hypercar had a starting price of €2.27 million. Considering there will be a maximum of 275 cars, some will see this P One Edition purely as an investment since the car’s value could go up in time, provided it’ll be a garage queen.

We’ll have to wait for a full release from Mercedes-AMG, but for the time being, these terribly cropped images will have to suffice.