This is the new Brabus Rocket 900. It’s a tuned version of the Mercedes-AMG GT 63 S 4MATIC+, which has been fitted with a host of engine and chassis upgrades to boost the saloon’s output to 888mph and push its top speed past the 200mph mark. 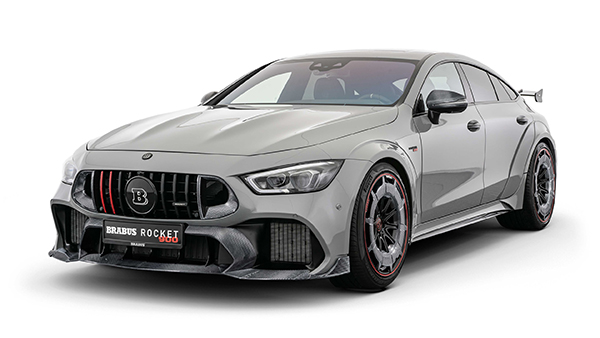 It’s also incredibly exclusive. Production is limited to just 10 examples worldwide, with each model carrying a price-tag of €427,000 (almost £390,000), excluding taxes. Brabus has confirmed that it will be building right-hand-drive cars on a first-come-first-serve basis – and that the Rocket 900 will be available to order in the UK. 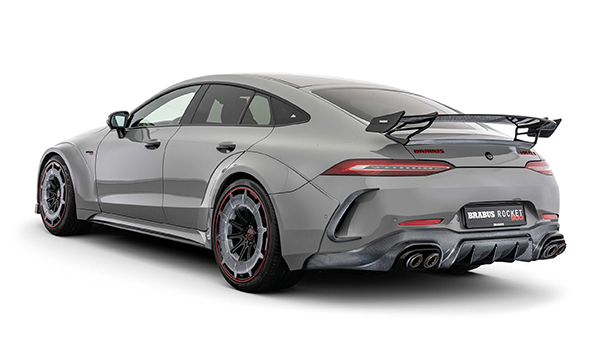 The Brabus Rocket 900 is powered by a heavily upgraded version of Mercedes-AMG’s twin- turbocharged V8 engine. The German tuning firm has increased the unit’s displacement from 4.0-litres to 4.5-litres, fitting a new crankshaft, larger forged pistons and stronger billet con-rods in the process. 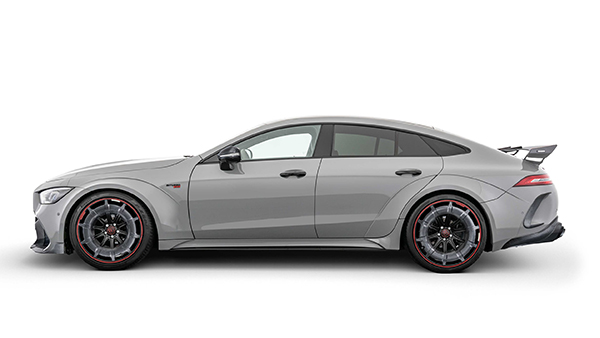 The car’s standard twin-turbochargers have been swapped for a pair of larger ones. These major engine changes are also supported by a new carbon fibre air intake, an improved fuel system, a freer-flowing exhaust and a recalibrated ECU.

All of this means the Brabus Rocket 900 has a maximum output of 888bhp and 1,250Nm of torque – but, to stop the gearbox from jettisoning its cogs under hard acceleration, Brabus has electronically reined back this latter figure 1,050Nm for the production version.

Like the standard Mercedes-AMG GT 63, the Rocket 900’s V8 sends drive through a nine-speed automatic gearbox to a four-wheel-drive system. Brabus says the combination gives the super saloon 0–62mph time of 2.8 seconds, a 0–124mph time of just 9.3 seconds and an electronically limited top speed of 205mph.

Brabus has also fitted a set of enormous carbon-ceramic brake discs and has re-tuned with the standard AMG GT suspension, lowering it by around 25mm. The tuner has also added a wider set of wheels and tyres, sized at 21-inches on the front axle and 22-inches at the rear. 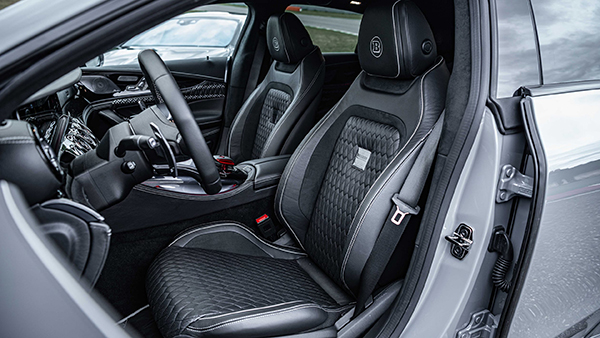 The most noticeable cosmetic tweak over the standard car is a new wide-body kit, which Brabus says both aids the Rocket 900’s aerodynamic stability and provides improved cooling for its brakes and engine. The body kit includes a larger front splitter, an aggressive rear diffuser and a new carbon fibre wing.

Inside, buyers get a set of Brabus-brand floor mats and backlit stainless steel treadplates, which match the colour of the car’s ambient lighting system. The Rocket 900’s doors and sports seats have also been trimmed in quilted leather upholstery.