Mercedes-AMG GT 63 S 4MATIC+ 4-Door Coupe may have a long name, but it’s also long on power, luxury, and technology, just as it should be.

Looking for an AMG GT with room for two more friends or your children? Mercedes-AMG thought so, too, unleashing the AMG GT 4-Door Coupe upon the world in 2018. With a choice of engines, rear- or all-wheel drive, and a sleek roofline with five doors for all the access, this is an executive-class ride with ultra first-class spirit. 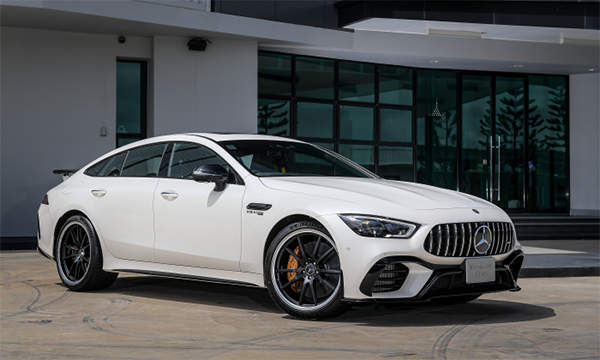 The top-tier model (for now) is, of course, the AMG GT 63 S 4-Door Coupe. Recently, Mike Van Houdt of ACCELER8 took an example out for an extensive overview and drive through London, Ontario. Let’s see what he discovered, shall we?

“My favorite car of all time was the Audi RS7 Performance,” said Van Houdt, “and to me, I felt like there was no other or better four-door sedan out there until I drove this […] I think when Mercedes built this car, they said, ‘Let’s take all the tech available in the world, let’s take all the power available in the world, and make it a reality.’” 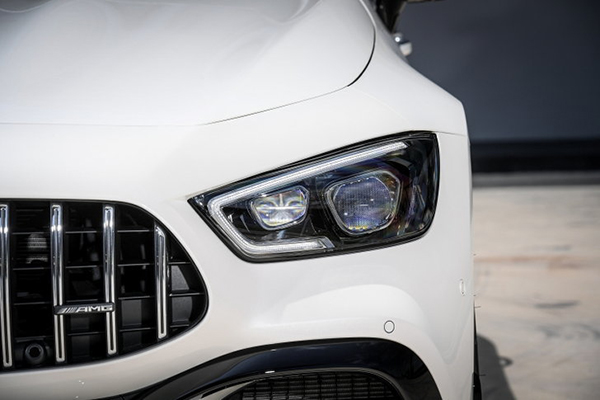 Van Houdt adds that the AMG GT 63 S 4-Door Coupe looks best in person, as no camera could properly capture its muscular elegance like the human eye. For him, the five-door leviathan “is like a jet without wings,” though it does have a fixed spoiler in the back. The only thing holding some back from buying it, he says, is the car’s links to the E 63 S and the CLS 63 (the latter no longer available because the GT 63 S 4-Door took its place).

“This is a V8, bi-turbo, four-liter,” said Van Houdt. “Now, you might think, ‘Yes, other products have it.’ But the difference being is that [Dominic Prew] built this motor. He built it with his hands.” 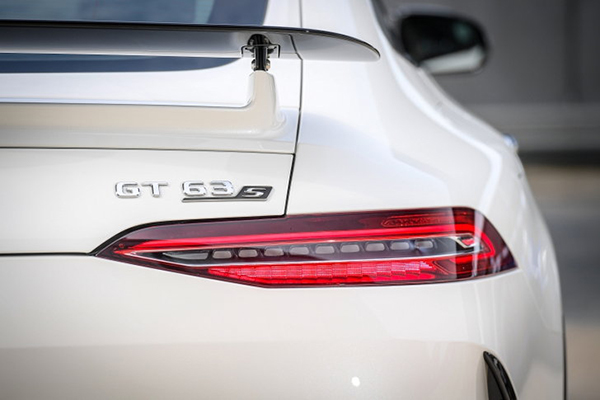 The hand-built turbo V8 knocks out 630 horses and 664 lb-ft of torque to the corners through the 4MATIC+ system, sending it to 62 mph in 3.2 seconds. Van Houdt notes the big V8 takes up every last bit of space under the hood, which means the twin turbos reside within the heads. However, this means less turbo lag, and more neck-snapping power.

“I’m on the inside of the GT 63 S AMG,” said Van Houdt. “First impressions? It’s magical. I love the matte finish carbon fiber all the way throughout. This does have the upgraded Burmester sound system, so there’s speakers everywhere.” 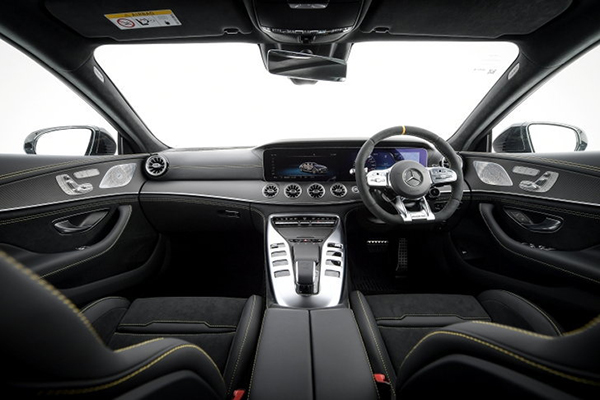 The centerpiece, of course, is the pair of 12.3-inch screens, providing access to the 64 ambient light colors among every mode and info you could need. The starter light pulses, the race buckets serve as a personal masseuse between hot laps, and rear passengers get a touchscreen to share, providing the exact same info as up front.

“The GT has six different driving modes,” said Van Houdt, “Slippery, Individual (which you can set up in the display here), Comfort, Sport, Sport+, and Race. Not only that, it actually changes the color in the car; all your buttons have a color scheme […] Everything changes color when you go into these different modes.”

Despite being a big car, the AMG GT 63 S 4-Door Coupe is a driver-oriented machine, per Van Houdt. The cockpit is narrow, and the steering wheel and shifter are small. With the sticky tires, though, road noise is an issue, one quickly mitigated by the sound of the big turbo V8. Off the track, however, it’s a big, luxury four-door coupe with cylinder deactivation to save some money on fuel. That’s what you get in ultra first class, after all.