Today’s sign that the future of the automobile lies in electrification comes from Affalterbach, Germany, where the high-horsepower madmen at Mercedes-AMG are sharing details on future performance variants. AMG is developing an EV that will debut later this year, but for now, we’re focusing on a new E Performance plug-in-hybrid powertrain for the AMG GT 4-Door and C-Class sedan. 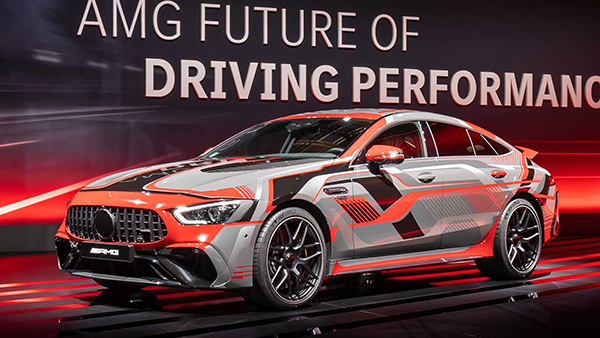 Mercedes-AMG is taking what it calls a “modular” approach with its new powertrains. Rather than a single gas-powered engine, these new models pair turbocharged four- or eight-cylinder gasoline engines and a nine-speed automatic transmission on the front axle with a so-called Electric Drive Unit (EDU) on the rear axle, which packages a lithium-ion battery, a cooling system for all 560 cells, a powerful electric motor, an electrically controlled differential, and a separate two-speed transmission. If that all sounds complicated, well, it is.

AMG is confident of the advantages of this approach, though, and it’s hard to argue when you see combined system figures like 804 horsepower (600 kilowatts) and 738 pound-feet(1,001 Newton-meters) of torque with the twin-turbocharged, 4.0-liter V8 E Performance variant. Those figures broadly fit some savory rumors. That setup, bound for the AMG GT 4-Door later this year, will help the sleek sedan scoot to 60 in under 3.0 seconds. For reference, the current GT63 S Four-Door will do the deed in 3.1 seconds with just a twin-turbo V8 at its disposal.

As for the C-Class, the rumors are true: the next AMG C will feature a turbocharged 2.0-liter four-cylinder. It’s the same M139 unit found in the current AMG A45 and CLA 45, but AMG is mounting it longitudinally rather than in a transverse layout.

Along with the reorientation, there’s a new electric turbocharger that Mercedes says is identical to the one found in the AMG One hypercar. These moves increase the 2.0-liter’s output to 442 hp (330 kW) before the Electric Drive Unit comes into play. AMG is promising that this new four-cylinder C-Class AMG, which like the GT 4-Door doesn’t have an official name yet, will “surpasses comparable current vehicles with V8 engines without hybrid drive.”

In designing and engineering these new powertrains, AMG opted not to simply go it alone, but to call in reinforcements from the Mercedes-AMG Petronas F1 team in Brixworth, England. The seven-time consecutive world champions contributed heavily to development of not just the aforementioned electric turbocharger, but to AMG’s work on the rear-mounted EDU. 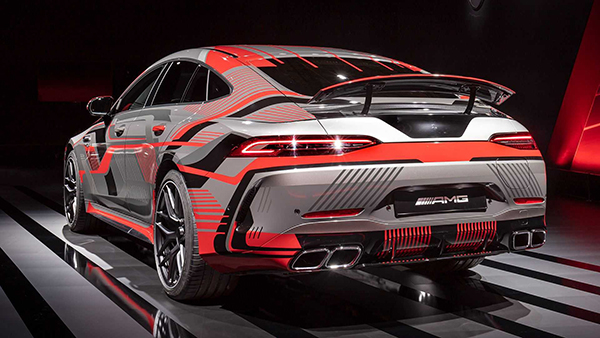 The two AMGs developed an electric motor with a power density of one pound per horsepower, that can deploy 201 hp (150) and 236 lb-ft (320 Nm) in 10-second bursts, and is always on hand with at least 94 hp (70 kW). There’s also a belt-driven starter-alternator that produces 14 hp (10.4 kW) and is responsible for firing up the gas engine and running certain things like the air conditioning or lights when the high-voltage battery is running low.

The 6.1-kilowatt-hour lithium-ion battery, meanwhile, relies on a liquid cooling system to prevent the high temperatures that can sap performance. A high-performance pump circulates 3.7 gallons of non-conductive fluid through cooling modules in individual cells, and then to a heat exchanger on the battery pack itself, before two low-temperature circuits pass things to the front-mounted radiator. This intricate plumbing keeps the battery pack at a consistent 45-degree Celsius (113 degrees Fahrenheit) temperature, optimizing the high-performance battery’s ability to deploy and recuperate energy.

The EDU’s integrated two-speed transmission follows a similar approach to what Porsche did with the Taycan. The first speed works from a standstill to provide immediate acceleration, while an electric actuator engages second gear at around 87 miles per hour to better take advantage of the electric motor while it’s at peak rpm. 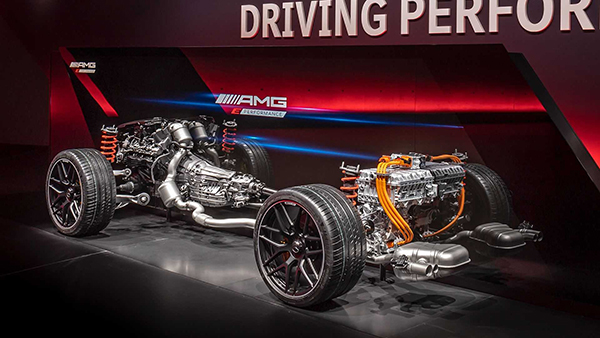 Taking a page from F1’s book, the EDU is “always on.” In other words, there’s no special trick or method to accessing the rear drive unit’s performance – it’s always on hand to provide electrical torque or to recapture energy. But this wouldn’t be a high-performance German vehicle without options for the driver. There will be seven drive modes, four different levels of regeneration (including one that Mercedes says mimics gas engine braking), and four separate modes for the AMG Dynamics system.

The dynamics that this new powertrain approach promises are super exciting. While the gas engine and electric motor can work in tandem for straight-line performance, the integrated rear locking differential can manage grip on corner entry. If the driver exceeds the amount of grip at the back, the electric motors can transfer torque laterally to take the place of traditional brake-based stability control or to the front axle via a driveshaft to produce an all-wheel-drive effect.

Despite what AMG has shared, though, there’s still a great deal about the new E Performance movement that we don’t know. These vehicles are plug-in hybrids, but the automaker hasn’t given even the slightest hint as to the range of the 6.1-kilowatt-hour battery. We also know nothing about charge time or speed. And in case you forgot, mum’s still the word on what AMG is calling the new E Performance C-Class and GT 4-Door. GT 73 seems like a sure thing, but can a four-cylinder C-Class really adopt the C63 mantle? Count those questions among the many we’re hoping will get answers as the year plods on.