The AMG E Performance 4.0L powertrain pairs a rear-mounted electric drive unit with up to 201 horsepower to a V8 engine equipped with electric turbochargers for instant torque. The electric motor drives the rear axle directly, but power can be sent to the front axle the same way it is transferred from the gasoline engine to the rear, thanks to AMG’s advanced all-wheel-drive system. This powertrain will make its way into the next-generation of AMG’s high-performance vehicles.

Mercedes-Benz has lifted the sheet off its new modular AMG E Performance hybrid powertrain, giving us our first in-depth look at the electrified system that will power the company’s future high-performance models. Borrowing tech from the AMG Project One and its recent line of mild-hybrid gasoline engines, the new E Performance powertrain represents a significant evolution of the AMG formula.

This new modular powertrain pairs a rear-mounted electric drive unit to a turbocharged gasoline engine. The electric motor drives the rear axle directly, but power can be sent to the front axle (essentially the same way it is transferred from the gasoline engine to the rear, just in reverse), thanks to AMG’s advanced all-wheel drive system.

In its most basic form, the electric drive unit comprises a 6.1-kWh battery pack and an electric motor producing up to 201 horsepower. Thanks to its holistic electrification strategy, both the company’s platforms and this new powertrain were engineered with plug-in tech in mind, which we expect to see introduced at the higher end of the performance spectrum first, such as in the rumored AMG GT 73e, which is expected to utilize an E Performance variant capable of producing up to 804 horsepower and more than 738 pound-feet of torque. 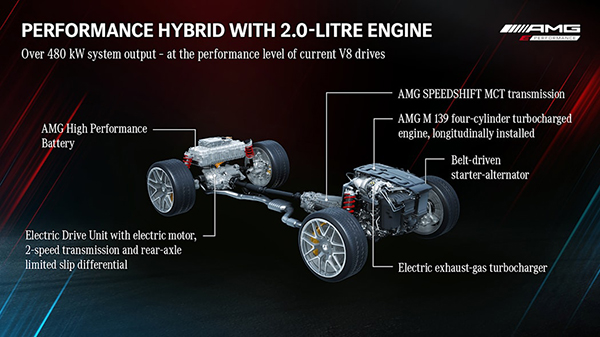 While the ICE engine up front is of a fairly conventional design, be it an inline-four or V8, it does incorporate one notable new element: an electric turbocharger. Mercedes has dabbled in electric boosting with its 48-volt mild hybrid powertrains, but this represents a fairly significant evolution of the tech.

At its core, it’s still an exhaust-powered turbine, but at lower engine speeds and throttle openings, it will be juiced by electricity from the E Performance hybrid’s battery, spooling it instantly and effectively eliminating any potential turbo lag. In this capacity, it eliminates the need for additional (or more complex) turbochargers to smooth out power delivery at different engine speeds.

Apart from the inclusion of electric power, AMG’s powertrain remains fairly conventional. Power from the engine goes through a nine-speed, multi-clutch automatic gearbox on its way to all four wheels, thanks to a 4Matic all-wheel drive system designed to harness both power sources. Torque can be vectored to all four corners from both the gasoline engine and electric drive unit, meaning even the front wheels can benefit from electric power under the right slip conditions. In typical AMG fashion, the advantages of this tech will be integrated into its cars’ available drive modes.

AMG has not yet confirmed individual power outputs for its new line of E Performance hybrids, but given its habits, we’re skeptical that there will be any regression in the performance of models whose powertrains get the hybrid treatment. This includes the enthusiast-favorite C-Class AMG lineup, which will pair the 2.0-liter engine from the smaller 45-series AMGs with the new electric drive unit, for a total expected output that should easily eclipse the current C63’s 503-horse figure.