We are finally have a van tour!! haha Custard the bus is officially complete! After a quick 6 week bus renovation for Europe last summer we realised we definitely needed some upgrades.

Craig and Aimee are what you could call passionate vanlifers. Unlike the current wave of vanlifers slash influencers, they’ve been doing it since before it became the trendiest thing to do, shortly after the start of the 2020 international health crisis. They’ve been on the road on and off since 2014 and have been documenting their adventures on their many platforms, where they go by the moniker Kinging It. As of the summer of 2019, they’re living permanently in Custard.

Custard is their bus home conversion, a very cozy and quite good-looking place they crafted on their own, without having any kind of experience in this sense. Craig and Aimee are from South Wales and, together with Custard, they’ve been anywhere from the UK to Europe, Sahara and Morocco. Right now, Custard is taking a short break, while Craig and Aimee are in Vietnam traveling by bike.

Custard started out as an old, rusty, and very sad-looking 2001 Mercedes-Benz Vario 814 they found on eBay. This was in early 2019 after they had already traveled the world extensively, even doing the Mongol Rally in Russia in a 1.2-liter Fiat Panda. They had decided they wanted to make the switch permanently, and the 24-seater minibus was perfect for them: it could be a permanent home with all the creature comforts but still of a relatively smaller size to allow them complete freedom on the road.

They bought Custard on the cheap, sight-unseen, for £2,000, so approximately $2,300 at the current exchange rate. When it arrived from Bristol, they came to regret their rush because it was in a very rough state, including heavily rotten panels throughout. Even worse, they gave themselves six weeks to complete the conversion, because they had already planned their first trip for that summer, in France.

As per their own admission, to say that the conversion was a challenge is an understatement because everything was made even more difficult by their lack of experience, time constraints, and, more importantly, the state of the vehicle. At the end of six weeks, they declared themselves half-satisfied with the result, and they hit the road as scheduled. 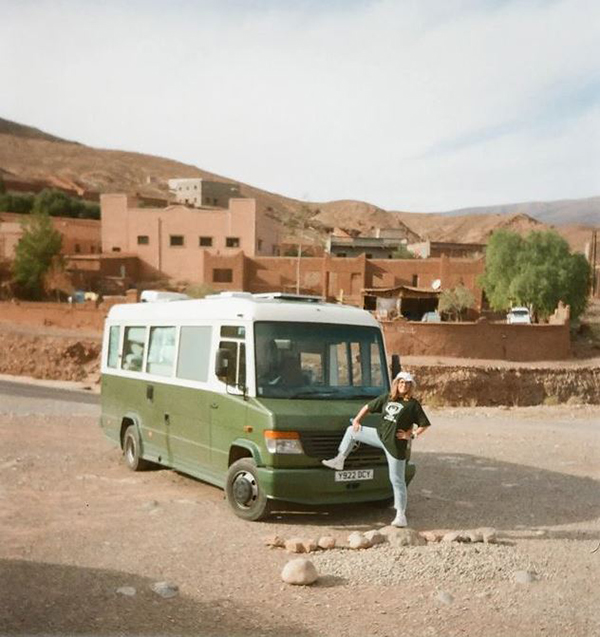 In 2022, Custard looks different, and that’s because that first version wasn’t fit for what they had in mind. Incidents on that maiden trip included losing the exhaust on the highway and frequent water leaks, so after a few months, they brought the bus back into the shop and set out to do things by the book this time. V 2.0, which is the current iteration of Custard, no longer has rust in the bodywork, has a better solar setup and thus extended autonomy, and is more appropriate for extended trips.

That’s where Craig and Aimee’s story is different from many: while they do say that “if we managed to complete a DIY bus conversion on our own, anyone can,” they also take the time to highlight the negative aspects of such projects. They learned by trial-and-error, and they’re honest about it because they want others not to make the same mistakes. They also have a very humorous way of telling stories, and that too accounts for their incredible popularity online.

Right now, Custard is a proper, albeit compact, home. It has a wet bathroom with a toilet and shower, a living room that can be an office, a dining room, or a guest bedroom, the master bedroom area, which converts into a cinema, a full kitchen, and plenty of storage. It has a water filter and hot water, a packed garage, and plenty of personality – and some custom touches, too. To boot, thanks to a 3,000 W inverter, three 100 aH Lithium deep cycle batteries, a solar panel array on the roof (one 210 W and two 110W Victron panels), and two b2b chargers, it is perfectly livable wherever you may park it.

“Building a van out is one of the most challenging, monumental projects you can ever do, but when it’s done it’s so satisfying!” the couple say. “We learned so much on our journey and luckily met so many legends who taught us so much too. If you’re thinking about doing it then you definitely should! But make sure you’ve got three side jobs coz it ain’t cheap.”

When Craig and Aimee are not living off their online content and assorted merchandise, they’re doing all kinds of interesting challenges to raise money for charity. Their most recent, the Wheelie Bin Challenge, saw them travel by trash can for 200 miles through Wales, raising over £50,000 ($57,000) for a cancer charity.