The new four-wheel-drive SL 55 AMG is surprisingly sharp to drive for a two-tonne, open-topped car and its hood-up refinement is also deeply impressive. But its interior, although extremely well equipped, lacks design maturity – and if ever a car could have too many toys to play with (or become confused by) this is it. We like the new SL, but we don’t love it. 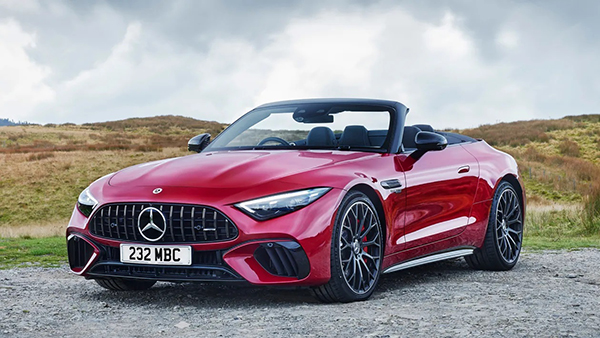 Mercedes entrusted the development of the new SL to its AMG division – and in most areas, it shows. Despite weighing almost two tonnes and being powered by a familiar 4.0-litre twin-turbo V8, the new SL 55 AMG 4MATIC+ is a sharp car to drive on UK roads. One that’s surprisingly hard to fault dynamically, even if it does look a bit awkward compared with its predecessors.

It’s also the first-ever SL to be available with four-wheel drive, and features a wealth of other new technical innovations, such as Active Ride Control and rear-wheel steering, plus a hyper-intelligent fresh voice-control system. There’s also a pair of small but just-about-usable rear seats for the first time in an SL, while the new electric hood takes only 15 seconds to open or close, and can be operated at speeds of up to 40mph.

So there’s little doubting the credentials of the all-new SL 55 AMG on paper. But there’s also no denying how expensive it has become, the 55 4MATIC+ Premium Plus version here costing an eye-watering £147,475. And remember, the 55 is merely the mid-range model. Above this sits the 63, which has even more power and performance from what is essentially the same V8, yet costs 180 grand. Even the 43 costs the thick end of £110,000. 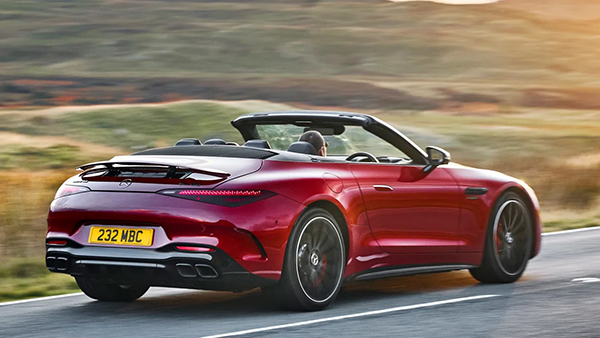 So where does all your money go? On all the various elements already mentioned, of course, plus some extra bits of sparkle that we’ll come to, none of which is unwelcome and most of which work very well indeed. But also, you suspect, on the electrified versions of this new ‘R232’ SL that we know full well are coming down the line.

The Mercedes’ engine develops 470bhp and a thumping 700Nm of torque, enough to fire the SL 55 to 62mph in a claimed 3.9 seconds and to a top speed of 183mph. The transmission is a nine-speed automatic that works a treat for most of the time, although it’s surprisingly low-geared and feels as if it has one too many options to choose from at low speeds.

Either way, there’s nothing wrong with the way the new SL 55 goes, especially if you factor in the deep-chested V8 noises it emits under full-beans acceleration, or the crackles that erupt out of its tailpipes in the Sport + or Track modes.

The body control, brakes, steering, ride and road refinement are all also very good indeed for such a big, heavy car, even if the steering becomes a touch over-meaty in Sport+ mode, while the wheel itself can feel a bit too thick and chunky. The active ride control works well to keep that big body planted and level in corners without the ride becoming harsh as a result, and road noise is unusually well suppressed for an AMG, even on 21-inch wheels. 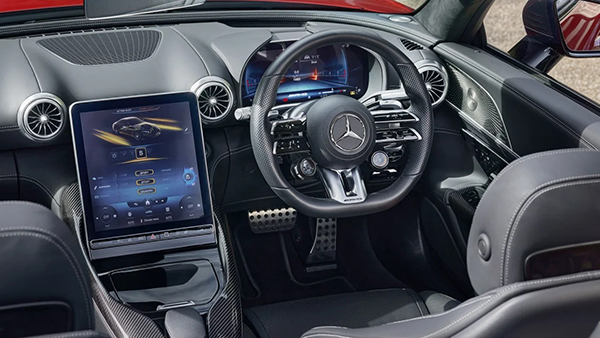 As for the cabin, on the one hand it’s more practical than ever before, thanks to its pair of small rear seats. It’s also incredibly well equipped in Premium Plus specification, with a huge new central touchscreen that controls just about all of the car’s myriad on-board technologies, and whose position adjusts electrically to make it more readable in sunlight, which is a nice and useful touch.

The main instruments are also fully digitised and change dramatically in appearance as you scroll up through the SL 55’s six drive modes. Some people will like what they see when this happens, while others won’t.

Regardless of which drive mode you select, the Mercedes’ front seats are always impressive in the combination of comfort and support that they offer. The boot, although hardly spacious, provides just about enough room for luggage, with a theoretical 213-litre capacity with the hood up, and somewhat less with it down.

Some people will no doubt like the SL’s accommodating new interior, with its deliberately high-end games console feel and style, but others will surely not. Whatever the case, the new SL is an impressive car overall, even if it does now cost an eye-watering amount of money.