Now that the new S-Class has been officially revealed, Mercedes has removed the remaining camouflage from its prototypes as only the badges remain hidden on this near-production prototype. Granted, we’ve seen dozens of images with the overhauled luxobarge, but this is the first time we get to check out Daimler’s new flagship out “in the real world.”

Caught on the streets of Germany patiently waiting at a red light, the S had the optional handles that remain flush with the doors when they’re not in use. The handles electrically pop out not only when the driver approaches the car, but also in case of an accident or in a remote parking procedure. They’ve been implemented not only to make the W223 look more modern, but also to help with aerodynamics as the S-Class now has a drag coefficient of only 0.22 despite having a bigger frontal area.

Some would argue Mercedes should’ve been more courageous with the exterior design changes over the W222, especially since the interior is completely new. As always, beauty is in the eye of the beholder as some will appreciate the evolutionary approach while others will criticize the three-pointed star for its “more of the same” solution. 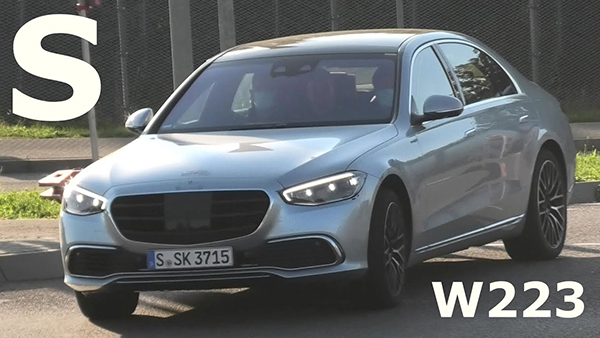 This particular prototype must’ve been a high-end version judging by the optional Digital Light headlights denoted by the blue accents in the cluster. Aside from providing supreme illumination with LEDs refracted and directed by 1.3 million micro-mirrors, these also serve another functional purpose. The headlights can project symbols onto the road surface, including traffic lights, stop signs, no-entry signs, and even an excavator symbol as a visual warning of upcoming roadwork.

We’re dealing with a Benz-branded S-Class as the extra-long Maybach variant will not be revealed before November. Whether a further stretched Pullman version is in the making remains to be seen, but we do know the W223 lineup will be diversified with an armored Guard model and AMG S63e and S73e hot hybrids.

The S-Class Coupe and Convertible will not return for the new generation, but Mercedes is developing the next-generation AMG GT and SL-Class models as direct replacements for the two-door S models. Reverting to a soft top, the iconic Sport Leicht has already been teased and will be unveiled in 2021.