Every new Mercedes-Benz S-Class needs to be significantly better than its predecessor. The next-generation model is almost ready to make its global debut, and official details about it are beginning to emerge. Mercedes announced the sedan will inaugurate a new version of its MBUX infotainment system that’s packed with a mile-long list of features ranging from fingerprint recognition to a Chit-Chat function that answers questions.

The software’s central component is a 12.8-inch, portrait-oriented OLED touchscreen with haptic feedback technology. It groups the functions you’d normally expect to find in an infotainment system, like navigation, connectivity, and entertainment, and it’s also used to adjust the climate control system. Going all-digital allowed Mercedes to design a dashboard with 27 fewer buttons than the one in the outgoing, current-generation S-Class. Safety-related features (like the windshield wipers and all of the lights) are still operated via stalks, however. 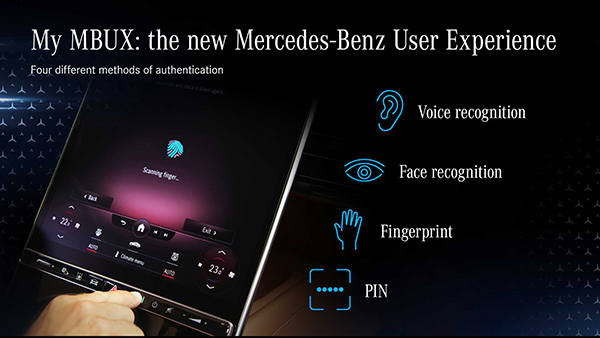 MBUX is no longer trapped in the dashboard-mounted touchscreen; it permeates the entire car. It responds to touch inputs, voice commands, hand gestures, and eye movements. It still wakes up when one of the passengers says “Hey, Mercedes” followed by a request, so the driver can say “Hey, Mercedes, play Hey Mercedes,” but it now responds to commands not preceded by the keyword. It also answers car-related questions, like where the first-aid kit is located or how to pair a phone via Bluetooth, and it learns the user’s habits over time. 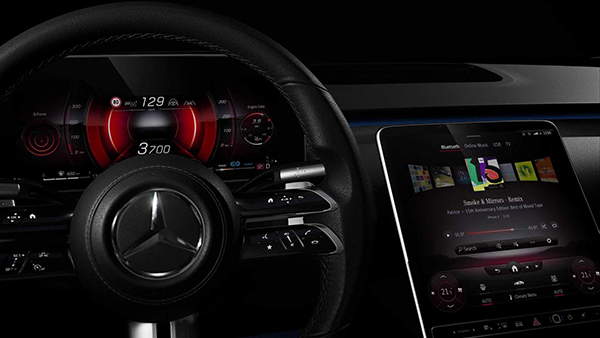 Mercedes added a Smart Home function that links MBUX to internet-connected appliances and devices, so it can pre-heat your oven. It talks to the car, too. For example, on-board cameras know when the occupants are exiting the car. If the blind-spot monitoring function detects they’re about to step onto oncoming traffic, it instructs MBUX to make the ambient lighting red as a warning. And, it gains a Chit-Chat function that, according to the company, “supplies the right answer to many questions — even questions about animal noises or general knowledge can be answered.” Although the system may not know the meaning of life, it can seemingly teach you to speak okapi.

MBUX will receive over-the-air updates, and motorists will be able to make in-car purchases, though precisely what they’ll be able to buy is still up in the air, if you’ll pardon the pun. Before buying, they’ll need to identify themselves by entering a PIN, with their voice, with a fingerprint, or with facial recognition technology. 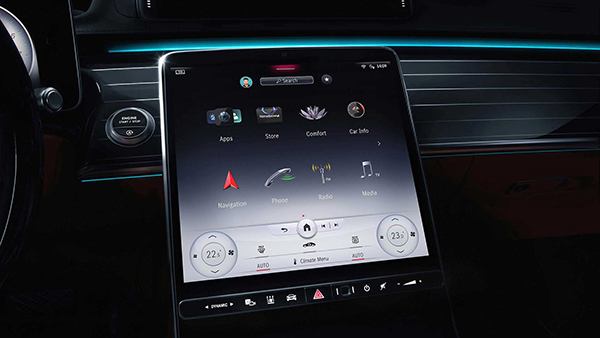 The second screen in the driver’s line of sight is a digital, configurable instrument cluster that provides a real three-dimensional effect at the touch of a button. Mercedes noted that, thankfully, the driver will not need to wear 3D glasses to use this function. An augmented-reality head-up display will be available, likely as an option. In the demonstration at around the 1:00 mark in the video above, a turn indicator races ahead of the car visually to show you exactly which street to take. 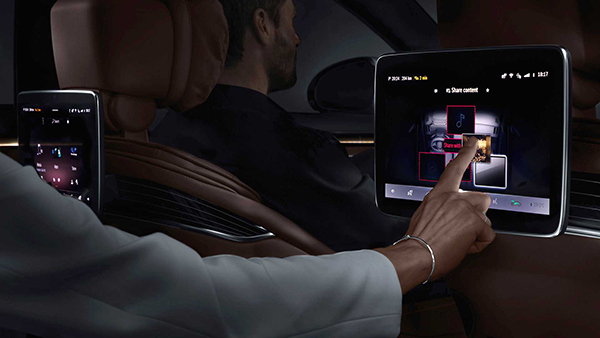 The passengers riding in the back can enjoy a screen-fest, too. The list of extra-cost options includes a rear-seat entertainment system that adds three screens; two are attached to the front seats, and one is integrated into the central armrest. Each screen runs a version of MBUX that gives the rear occupants access to personalized media content, so one can watch a movie while the other is listening to music. Sharing information — like a playlist or a restaurant review — with the driver or with the other person sitting on the back seat is possible, too. 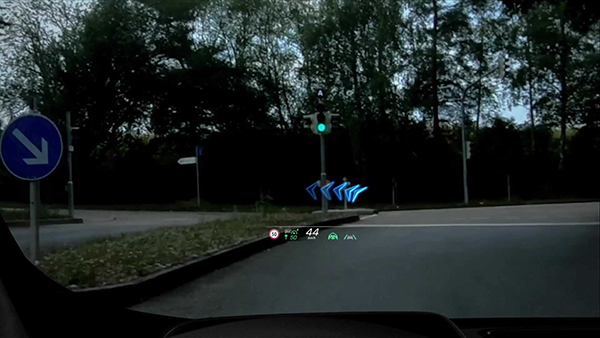 Screens, screens, and screens; what else?
Mercedes very clearly funneled a substantial amount of resources into developing lucrative on-board technology, but the S-Class isn’t merely a giant, internet-connected touchscreen on wheels. Although official details about what the next-generation model looks like beyond the cabin are few and far between, low-resolution spy shots published on Instagram in May 2020 gave us an early look at the sedan. Up front, the styling changes are largely evolutionary; it still unmistakably looks like a the flagship of the company’s range. Out back, it gains triangle-shaped horizontal lights connected by a strip of chrome, a styling cue that emphasizes its width.

Similarly, technical specifications remain under wraps for the time being. We’re not expecting massive changes, meaning the line-up will again include six-, eight-, and 12-cylinder engines, plus at least one plug-in hybrid option. Mercedes confirmed it will not build a battery-powered variant of the S-Class, but it will sell the sedan alongside a comparably-sized electric model previewed by the futuristic Vision EQS concept unveiled in 2019.

Mercedes-Benz will introduce the next-generation S-Class online in the coming months, and it should arrive in showrooms across America shortly after as a 2021 model. Pricing for the standard model will start in the vicinity of $100,000, and the range will later grow with the addition of Maybach- and AMG-badged variants.