Mercedes-Maybach S 680 W223 and a Mercedes-Benz S 600 W140 test crashing and everything is on video. This would have been a hell of an expensive test to perform. Luckily, it was just a simulation that has become viral.

No Mercedes-Maybach S 680 and no S 600 were damaged in the making of this video. First, because it is not an actual video, but a simulation. So now we can all relax.

The vid… simulation shows the cars crash-testing at speeds between 20 and 200 km/h (12 – 124 mph) with each of them T-boning the other right next to a wall. Thus the t-boned vehicle is squashed between the wall and the car that hits it.

None of them sustains much damage at 20 km/h (12 mph), with only minor deformation and windows breaking on the driver’s side. But the extent of the damage grows as the speed grows. We even get various angles of the impacts, so we get to see wheels flying off. 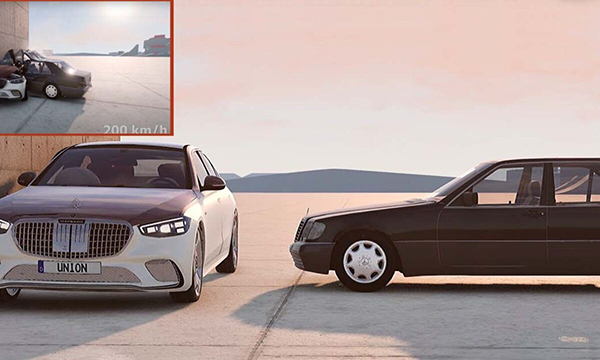 At 60 km/h (37 mph), it’s starting to become obvious that the chances of survival of the occupants of the t-boned car are extremely low. And it’s not only because of how bad cars twist and contort. But also because of the force of the impact, that would simply shatter everything on board. At this speed, even the roof of the W140 S 600 bends upwards, with the safety cell at high risk.

At 200 km/h (124 mph), the Mercedes-Benz S 600 W140 seems to even hit the wall on the other side of the Maybach S 680. And so does the Maybach when it is its turn to t-bone the W140. The video shows the aftermath of the crashes. And even though they are just simulations, such horror crashes, involving cars of any brand, are common worldwide. So it should make us think twice before we press the accelerator.

Stay alert, keep your eyes on the road, follow the regulations in the area you drive, and don’t drive under the influence. This is how you reduce the risks of replicating these simulations with real cars, on real roads, and, which is worse, real people.