The OG’s remember this project, but if you’re new to the channel – you might want to give this video a look. A few years back we built a G-wagon out of ice using an UAZ platform as the foundation, and this is a montage of the entire build from start to finish.

Tribute cars come in all shapes and sizes, and a new build from the Garage 54 YouTube channel honors the iconic Mercedes-Benz G-Class in a very unique way. Instead of using sheet metal and other typical car materials, the Garage team decided to build its tribute car out of large blocks of ice.

In the video, the car begins its life as a UAZ 469, with the team removing the SUV’s boxy body first, leaving just the rolling chassis. A new frame is constructed in the shape of the G-Class, and the car is then moved outside, where the real building begins. Ten tons of ice in big bricks serve as the starting point for the body.

Chainsaws and chisels help cut the blocks of ice into more manageable pieces before being attached to the frame one by one. The G-Class slowly comes together, with the pieces being chiseled smooth before being scored, so they adhere to the other blocks. This is done by injecting water between the ice blocks’ seams, allowing the water to freeze and bond the blocks together. 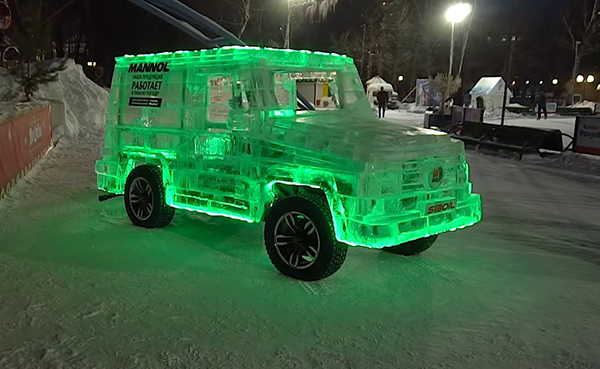 Once the blocks of ice are attached to the car, the team begins cutting the SUV into its final shape, chiseling a Mercedes-like grille onto the front end that hides underneath the model’s V-shaped hood and iconic fender marker lights. The team was even able to find G-Class wheels that fit the UAZ.

Completing the Mercedes build are some integrated LED lights that light up the ice, giving the icy SUV some unique theatrics. Adding to the fun is the fact the SUV is still drivable even with the added weight of the ice. We expect the suspension and gearbox are far from happy with this arrangement.

Garage 54 is a YouTube channel that pushes the boundaries of automotive engineering, often putting the wackiest vehicular ideas into action. The channel has built a car with office chair struts for its suspension, a Lada with a large roof brake, and another Lada with 14 wheels. Truly bonkers stuff.