Mercedes-Benz is the latest automaker to create a specially colored vehicle in honor of Pride. The company uses a G-Class as the starting point for applying the rainbow color gradient to this machine. 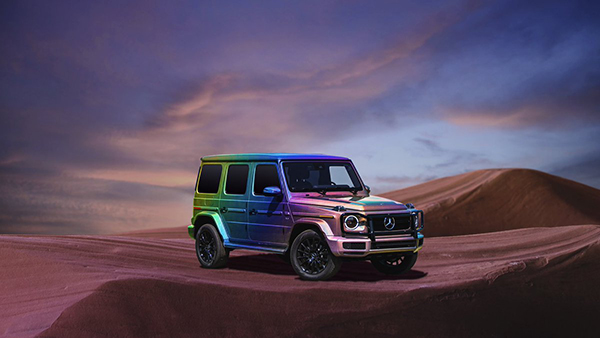 The color change starts with a pinkish hue on the nose. Although, the bulge in the hood is green for an extra pop of color at the front. The hue then transitions to purple around the base of the A-pillar. The doors progress from blue in front to green at the back. Finally, the tail is yellow. Black wheels and a matching brush card on the roof add some contrast to the vehicle.

Mercedes is currently developing a new G-Class 4×4 Squared that creates an even more rugged version of the already capable SUV. It has a higher ride height, bigger fenders, and a roof rack that appears to have a light bar on the front in some images. We’d like to see the rainbow color scheme on the upcoming model because the bright look would be an odd match against off-road-ready styling.

Mercedes is hardly alone among automakers in creating special vehicles for Pride, especially among companies from Europe. Most notably, Ford recently built a Ranger Raptor wearing a rainbow and gold sparkles for Christopher Street Day in Cologne, Germany. Ford called it the Very Gay Raptor after a social media commenter said the shade Performance Blue available on the truck was “very gay.”

In addition, Bentley is fond of celebrating Pride. In 2020, it showed off a Bacalar with a rainbow color scheme with stacked stripes of each color decorating the body. The automaker also built a Continental GT Convertible with a rainbow wrap for Cheshire East’s Virtual Pride 2020 event.