We’ve driven the Mercedes-Benz EQS, and written about it quite a bit, but this electric sedan is one where the interior gets as much attention as the range or performance. Usually, the focus is on the intense Hyperscreen, but there’s more to the EQS interior than just the tech … and it all takes some getting used to. 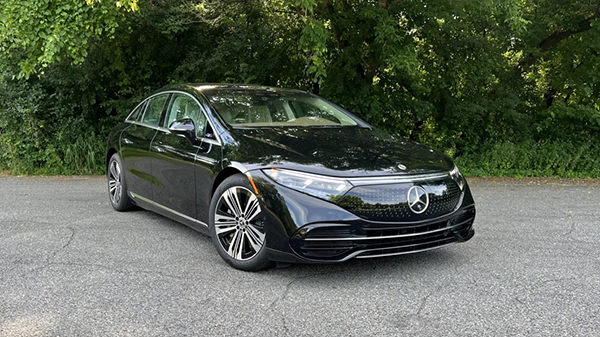 But, sure, let’s start with the elephant in the car. That array of displays is a bit intimidating at first. After a week of driving, I was still fumbling our way through it, wanting to pull the car over to navigate my way through. There’s just a lot going on, especially when you to make some setting adjustments. Eventually, once you have all your settings configured and saved to your driver profile (which is accessed with a biometric fingerprint scanner on the center console) you might have a lot less to fiddle with on a regular basis. It takes time, though.

That said, it’s all artfully integrated into the interior — indeed serving as a showcase piece — feeling like it deserves its place in this luxurious EV. Your passenger will probably appreciate having a screen of their own, so long as they aren’t prone to screen-induced motion sickness.

If you don’t want the Hyperscreen, though, you don’t have to have it. While it comes standard in the EQS 580 and and AMG versions, it is a $7,230 option in the 450+ that otherwise comes standard with the same interface as the S-Class. We wouldn’t exactly call that a step down.

And of course, the shiny Hyperscreen is complemented by a generous amount of interior ambient lighting. This is something we’ve come to expect from Mercedes interiors, and it only seems fitting in this futuristic cockpit. When not driving, it’s pleasant just to sit inside the EQS and unwind a bit in the luminescence before entering that harshly-lit grocery store or cacophony of kids and pets waiting behind your front door. 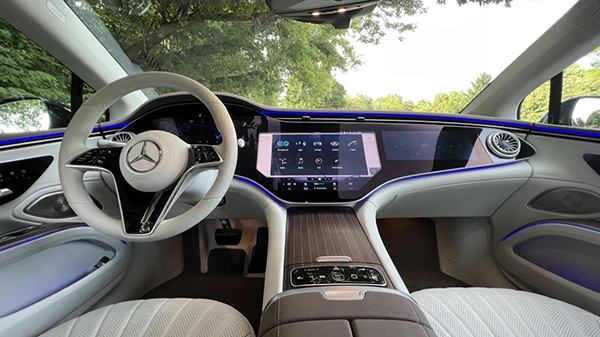 Also, take a look at that “Natural Grain Yacht-Design Brown Walnut with Aluminum Lines” on the center console above (a $1,515 option). It shows up on the door armrests, too, but it would be nice to see more of it throughout the cabin.

The seats, upholstered in supportive, high-quality perforated MBTex faux leather, are successful in their mission of being both comfortable and luxurious. Heating and ventilation are standard. Ours also had an optional (in this Premium trim — standard on higher trims) massage function, which was honestly a bit underwhelming, but could help for sustained comfort on a long tour.

The little pillow things on the headrests, though, were annoying. They always felt unnatural when touching the back of my head. Unnerving, even, when you lean back after forgetting their presence. They’re easy to quickly adjust without fiddling with any belts or buttons — they simply slide up and down — but they also easily fall back out of place. A tug of some Velcro can remove them altogether.

Another thing that gave us trouble over the entire week were the controls for the “Panorama” roof (actually two panels) with power tilt/sliding front panel. The roof and sunblinds are controlled with a single bar that serves as both a slider and press-button. I could never get it to do what I wanted. Try to open the blinds? The thing would tilt open, and vice versa. After many frustrating attempts to get the hang of it, I just stopped using it, to the chagrin of my young passenger in the rear. 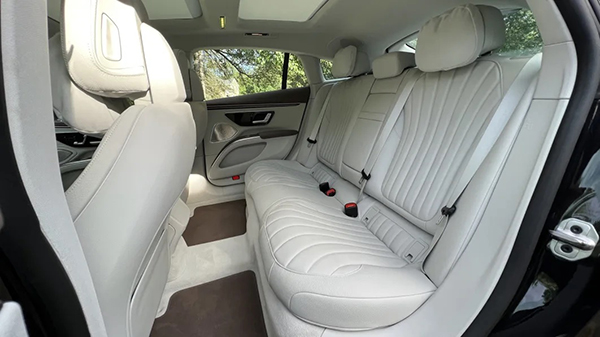 Moving to the back seat, the passengers have it good, so long as they’re not too tall. Ours weren’t, so the sloping roofline wasn’t an issue, even with a high-back booster seat installed. The rear seats aren’t heated or ventilated unless you spring for the top Pinnacle trim. Still, while simple, they’re quite luxurious, especially if you consider legroom a luxury.

As for storage, there’s a bit. That trunk space is big, and versatile as James Riswick observed when he took a road trip in an EQS 580. Up front, the center console bin is generous, and there’s an open storage space below the console bridge. The cupholder space is versatile, with the ability to remove the cupholders completely in order to stash more items. You’ll also notice USB-C ports in the storage bins, as well as in a little pop-out on the rear of the center console for backseat passengers.

One final thought: the aural experience inside the EQS is fantastic. For one thing, the car is ridiculously quiet as it glides down the road. You feel safe, secure and serene inside this luxury EV. Furthermore, the Burmester surround audio system that’s standard in the 450+ is a treat for the ears, whether you’re listening intently to an audio book, opera or your favorite rap album. The sound is crisp and enveloping. Just another reason to linger in the driveway before heading back through your front door.