If you value comfort, luxury and refinement above all else, and you want an electric car with a huge range and loads of technology, the Mercedes EQS is up there with the very best. A Porsche Taycan might be better to drive, while a Tesla trumps it for charging, but neither can match the Merc’s classy cabin or spacious rear seats. To think that next year’s EQE will wrap up all of this car’s technology in a smaller and more mainstream package could even mean the best is yet to come from the EQS’s new platform. 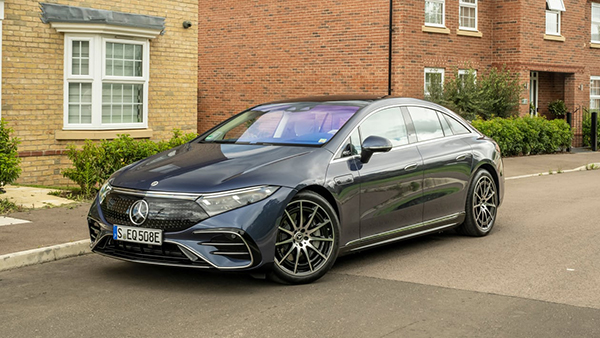 It seems not a week goes by without another manufacturer announcing its extensive plans for a zero-emission future. Recently, Mercedes confirmed it will offer an electric vehicle in every segment by 2025, moving its entire range to fully electric by the end of the decade.

But Merc started this transition some time ago. If we discount niche offerings like the original B-Class Electric and limited-run SLS Electric Drive, the maker has seen great success with its wide-range of plug-in hybrid models, and, more recently, its EQA and EQC electric SUVs.

All of these cars are based on combustion-engined platforms though, and as such, suffer all the usual weight, handling and practicality problems associated with models converted from petrol and diesel platforms. Vehicles designed with electrification in mind from the outset often benefit from superior packaging – improving everything from performance to cabin space.

In time, Mercedes will put all of its EVs on purpose made electric car platforms, and the first car to go onto a dedicated electric architecture is this: the EQS. It’s an electric S-Class limo in all but name, and it has the biggest battery ever fitted to a production car, which enables a Tesla-beating 484-mile WLTP-rated range. 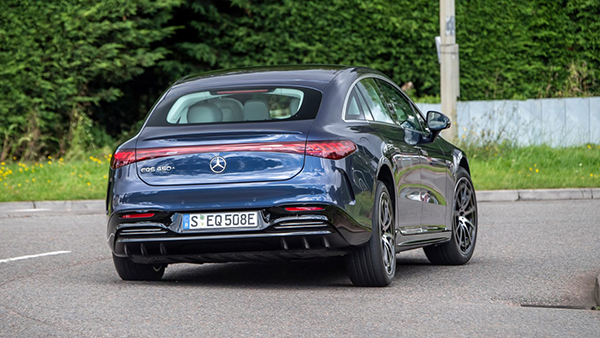 On the face of it, there are similarities with the EQA and EQC, though its wide stance and coupe-like roofline separates the EQS from its SUV siblings. Exact prices and specs will be announced in due course, though it’s not thought buyers will get much change from £100,000, even for entry-level AMG Line models without a single option box ticked. Expect kit like matrix lights, 20-inch wheels and a panoramic roof to be included on all models.

Inside, the EQS feels quite unlike any modern Mercedes – especially on cars fitted with the new MBUX Hyperscreen infotainment system. Expected to be a circa-£8k extra when the EQS goes on sale in September, the set-up comprises three displays beneath a single pane of scratch-resistant glass. Putting even the biggest Tesla touchscreens in the shade, the Merc’s digital dashboard spans 56 inches corner to corner, and operates everything from media and phone connectivity, to the myriad seating configurations and driver assistance systems.

While somewhat overwhelming to begin with, the system is surprisingly intuitive to interact with. The home button brings you back to the main map interface, with an easy-to-access favourites bar bringing up your most-used features. You can set up the car exactly to your liking, of course; the EQS is certainly not short on customisation options.

The third screen sits directly ahead of the passenger, giving a degree of symmetry to the layout. It gives your friend or family member access to their own media controls and even has its own Bluetooth input, meaning they can listen to their own music or radio station via a set of wireless headphones. We’d question its purpose and validity in real-world use, though pleasingly, we never found the extra display distracting on the move.

As you’d likely expect, everything you see and feel – as well as much you don’t – is built using the finest materials money can buy. Everything in the EQS – apart from the squishy, quilted leather seats – is rock solid, and while there’s a familiarity to the switchgear, every button or lever seems to have been upgraded for Merc’s electric flagship.

At low speeds the EQS is genuinely near silent, with just a little wind whistle appearing around the A-pillars as you approach or exceed the motorway limit. The driving experience, on the whole, is very pleasant, with unrivalled refinement an undisputable benchmark for this car’s team of talented engineers.

But despite costing similar money, the Mercedes cannot challenge a Porsche Taycan in the corners. The standard-fit air suspension is closely related to that you’ll find on the latest S-Class; set up for comfort above all else, the EQS feels overwhelmingly soft even in its sportiest settings. The result is tangible body roll through faster changes of direction.

Our car came fitted with the optional 10-degree rear-axle steering – 4.5-degree rear-axle steering is standard – and while it made the car appear incredibly agile and surprisingly nimble, it took a while to get used to. The light steering once again emphasises this car’s sense of agility, but at the same time removes a layer of texture and engagement to the driving experience. 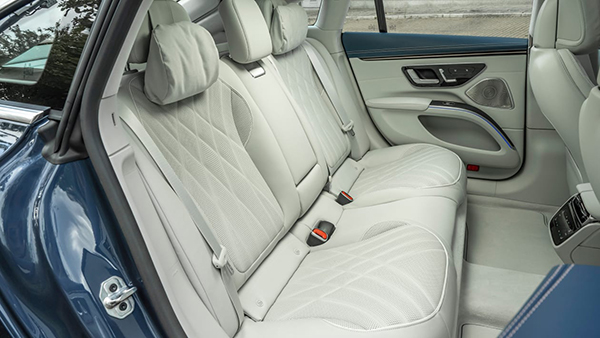 With ‘only’ 324bhp, you might expect this 2,480kg saloon car to feel ponderous, perhaps. In fact, the opposite is true. It’s not rapid like a Tesla Model S, but the instant shove and considerable torque from the EQS’s electric motor ensures it’ll embarrass much lighter sports cars off the line. It builds speed in a more natural fashion than many high-power EVs, always feeling alert, no matter your speed.

Ride comfort is, 90 per cent of the time, very good. Small ripples in the tarmac are all but completely dissipated, while you’ll see and hear motorway expansion gaps more often than you’ll feel them. Deep potholes can upset the car’s composure, but by and large, the EQS is a very comfortable car; perhaps not quite as cosseting as a petrol S-Class, but not far off.

Like in the EQA and EQC, there are different levels of regenerative braking to choose from. In addition to what is effectively ‘on’ and ‘off’, there’s an ‘intelligent recuperation’ setting, which uses the EQS’s various cameras and computers to decide when to feed power back into the battery. It isn’t fool-proof, but it works well in general driving, slowing the car for roundabouts and the like, or to match the speed of the vehicle in front. It can even bring the car to a complete stop.

We found ourselves using this setting almost exclusively, barely touching the conventional brakes in normal use. This is something of a blessing in disguise; Mercedes still hasn’t mastered natural brake pedal feel in its big EVs. 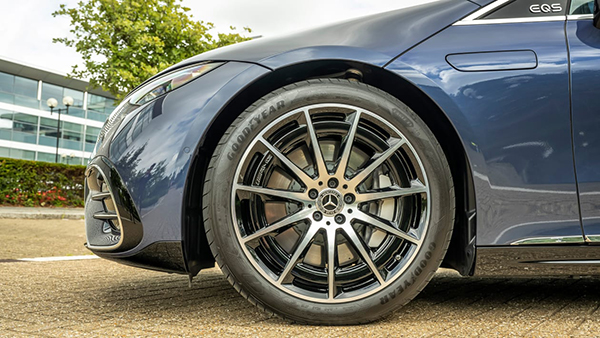 That huge battery we mentioned earlier is good for, Mercedes says, 484 miles on a charge – equating to theoretical efficiency of almost 4.5 miles per kilowatt hour. On collection, our car was showing 414 miles (3.8mi/kWh) on a full battery, and on slower roads with gentle control inputs the range dropped largely in line with distance travelled. Following a longer spell on the motorway and some faster B-road miles, quoted efficiency fell to around three miles per kilowatt hour – a figure we believe to be achievable in everyday driving – or around 320-380 miles on a charge.

Speaking of charging, while the EQS can’t match a Taycan or Audi e-tron GT for quick top-up times, its 200kW maximum charge rate is still competitive and should be enough to future-proof it for years to come. Find an appropriate rapid charger and the Mercedes will complete a 10-80 per cent charge in just 32 minutes. Recharging via a 7kW home wallbox takes just over 17 hours, though those with the means to do so can also take advantage of the EQS’s 22kW on-board charger, reducing that time to 5 hours and 45 minutes.

What it loses to the Porsche and Audi on charging, it more than makes up for when it comes to space and practicality. The EQS doesn’t offer S-Class levels of rear seat room – you can blame the sleek shape and low roofline for that. But there’s just enough head room for a six-foot-tall adult to sit comfortably. Leg room is no problem whatsoever, and there’s loads of space for your feet thanks to the almost completely flat floor.

The Merc’s hatchback tailgate means it has its rivals licked when it comes to practicality, too. If you’re used to feeding in bags and suitcases into a narrow saloon-style opening, the EQS’s roof-hinged boot lid will come as something of a revelation. It opens to reveal a total load volume of 610 litres, or 1,770 litres with the rear seats folded – that latter figure beating Tesla’s 1,645-litre maximum for its rival Model S.