Sound on! I have taken a new spy video of the full electric Mercedes-Benz EQE SUV during some tests at the Nürburgring.

Mercedes-Benz’s EQE SUV mid-size electric SUV has been spied again, and this time we have video.

It’s one of a handful of vehicles designed around the dedicated electric vehicle platform known as EVA, which debuted in the 2022 EQS full-size hatchback.

The platform has since appeared in the 2023 EQE mid-size sedan and 2023 EQS SUV full-size SUV, and in its next and final act will appear in this EQE SUV.

The EQE SUV is due out later this, meaning we should see it arrive as a 2023 model. It will be built at Mercedes’ plant in Tuscaloosa, Alabama, where the EQS SUV is already in production.

The EQE SUV may look like the EQS SUV, but there are some subtle differences. The rear doors and trunk section don’t stretch as long here, compared to the EQS SUV. The front overhang of the EQE SUV is also shorter, and its hood positioned not quite as high. The EQE SUV also appears to have front fenders that are separate to the hood, whereas the EQS SUV has the front fenders joined with the hood, like on the EQS hatchback and EQE sedan. 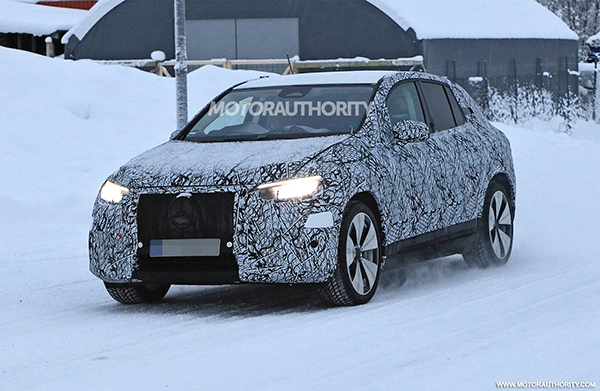 There’s no shot of the interior but the design here should match up with the EQE sedan, whose own interior design (shown below) matches up with the EQS hatchback and EQS SUV. This means buyers can look forward to the dash-wide Hyperscreen as an option.

Expect the EQE SUV at launch to have a similar powertrain setup to the EQE sedan. This means the standard setup should feature a 90-kilowatt-hour battery and a single motor at the rear delivering 288 hp and 391 lb-ft of torque. A more powerful setup with a motor also at the front axle for all-wheel drive should also be on offer, and you can count on all-wheel steering making the cut, possibly as a standard feature in the U.S.

As for range, the larger, more powerful EQS with a 107.8-kwh battery delivers a maximum EPA-rated range of 350 miles. We can expect something similar for the smaller EQE SUV on account of its smaller battery. It’s possible Mercedes will launch models with a higher range at a later date.

We will also see Mercedes-Benz AMG launch its own version of the EQE SUV, as prototypes are already out testing. Expect powertrains to be shared with AMG’s take on the EQE sedan, which would mean up to 677 hp and 738 lb-ft on tap.