The Mercedes-EQ sub-brand is preparing a massive onslaught of mainstream electric vehicles to join the flagship EQS full-size sedan. Joining the US market this autumn will be the 2023 Mercedes-Benz EQB SUV, an all-electric version of the GLB compact crossover. Like its sibling, the EQB will be available with two or three rows of seating, which might very well make it the most popular Mercedes-EQ product on our shores. 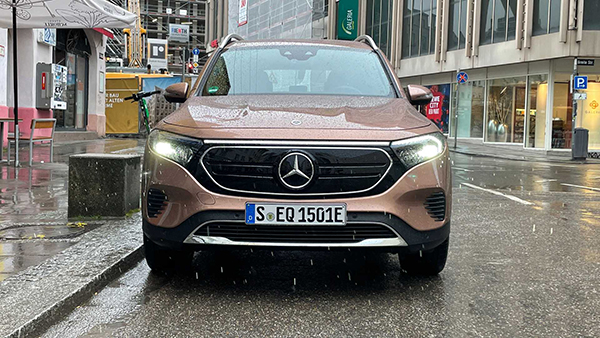 That will only be the case, however, if the EQB can preserve its gasoline-powered equivalent’s enjoyable driving experience and reasonable price of entry. While Mercedes won’t speak to the latter just yet, the automaker did invite me out to its home in Stuttgart, Germany, to take the EQB out for a quick spin. Comprising about 50 miles of varying speeds and road types, the short route still allowed me to ascertain very quickly how much of the GLB’s spirit lives in the EQB (and how the all-electric powertrain helps the crossover feel simultaneously more relaxed and more engaging).

Sunshine On A Cloudy Day
Germany’s skies let down a deluge shortly after I began my time in the EQB, and although the rain relented after a few minutes, the road still remained sopping wet for the rest of the drive. Nevertheless, the cute little crossover felt sure-footed and secure at both 65 miles per hour on the freeway and a third that speed on winding back roads. That’s partly due to the US-spec Mercedes EQB’s standard 4Matic all-wheel drive, which routes 225 horsepower and 288 pound-feet to the ground in base 300 form or 288 hp and 384 lb-ft if you opt for the 350 model.

My tester, a rosy gold EQB 300, boasts an additional 4 horsepower and 30 pound-feet over the gas-powered GLB 250, giving it nippy performance and instant response around town. In spite of the EV’s added weight – an inevitability given the sizable battery – the EQB 300 doesn’t suffer from any loss of real-world performance thanks to its immediate torque delivery. In fact, it feels even more spry and nimble than the GLB 250 around town. 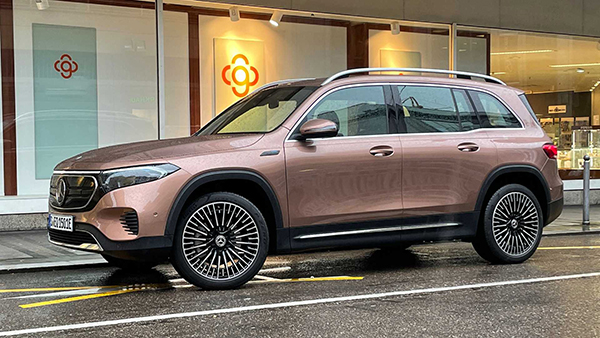 Helping matters as speeds rise is a drag coefficient of 0.28 (down 0.02 compared to the gasser) that allows the EV to cheat the wind a bit more easily. Also improving efficiency are regenerative brakes with three levels of recuperation and an intelligent mode that uses the car’s existing radar and navigation systems to detect surrounding traffic and predict upcoming curves in the road. It works very well in general, though the EQB won’t slow to a complete stop on regen, unfortunately. I’m not sure why, either, since the one-pedal drive is incredibly well-tuned on the EQS.

It must be acknowledged that the EQB is about 1,000 pounds heavier than the GLB, and that weight makes its presence known as speeds rise and the charm of the instant-on EV torque fades. Above 80 miles per hour, the EQB feels a bit flat-footed, and the top speed is limited to 99, so the EQB isn’t a freeway stormer like other Mercedes models. Most won’t care too much, but if you thrive on de-restricted sections of the Autobahn, the EQB will leave you wanting. 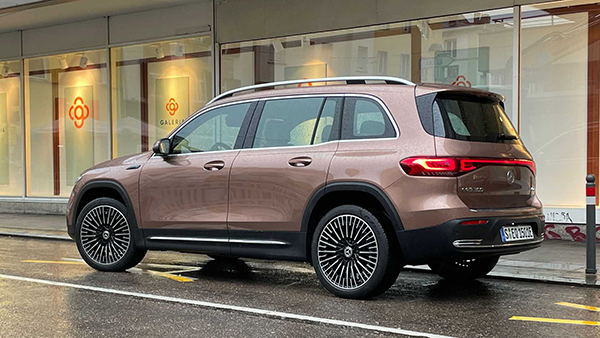 One area that the added mass actually helps is in handling. The EQB jettisons its sibling’s front-mounted gas engine and replaces it with an electric motor on each axle, plus a 66.5-kilowatt-hour lithium-ion battery in between the two mounted low in the floor. As a result, The EQB’s center of gravity feels much lower than that of the GLB, which reduces body roll in corners and improves turn-in. The electric crossover still isn’t particularly sporting – perhaps a Mercedes-AMG EQB 45 would rectify that – but it feels safe, stable, and secure on winding roads.

What’s more, the EQB 300 I drove in Stuttgart boasted impressive composure over bad pavement, with the low, heavy battery producing a sort of dampening effect. While the GLB can sometimes feel a bit coarse and gritty on rough roads, the EQB is quieter and smoother. Of course, the EV is still based on one of Mercedes’ cheapest cars, so it’s not hard to find natty plastics and a few little creaks and rattles in the cabin. Yet the EQB still feels worthy of its three-pointed star. 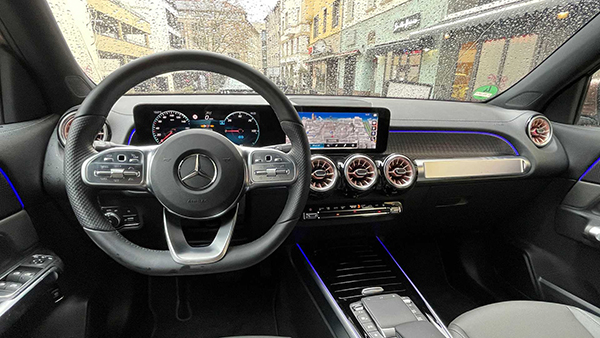 EV Couture
Like every other Mercedes-EQ product, the EQB wears a glossy black face, a pair of angular headlights, and an air curtain–generating front bumper. A swooping rear light bar and a venturi bumper valence highlight the butt-lift, while a set of EQS-inspired multi-spoke aerodynamic wheels provide further efficiency and family resemblance. The details are less boxy than the square-jawed GLB, but the electric crossover is still appealingly chunky when viewed in profile. Those minor alterations (and my tester’s fabulous coat of Rose Gold Metallic paint) give the EQB even more personality than the mini-bulldog GLB.

Inside, the changes are even more slight. The EQB gets rose gold accents on the vents and other interior brightwork, and the seats of my tester sported jazzy cloth inserts on the center. Otherwise, this is the same essential vehicle as the GLB, though it comes standard with that car’s optional 10.3-inch digital instrument cluster, 10.3-inch infotainment touchscreen, augmented-reality navigation, and 64-color ambient lighting that also shines through the translucent dashboard trim. The SUV boasts plenty of headroom and a good seating position front and rear, though the optional third row is best left for emergencies or sadomasochism only. 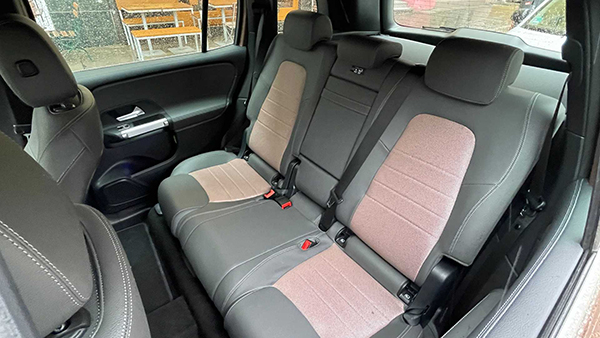 Going The Distance
Basing an EV on a platform intended for internal combustion isn’t usually a recipe for short charge times or long ranges, but the 2023 Mercedes-Benz EQB nonetheless achieves an adequate 419 kilometers (260 miles) on the optimistic WLTP scale. The more accurate EPA test should yield a score of about 230 miles, and if that estimate is accurate, the EQB would fall slightly behind the similarly sized, similarly powerful Audi Q4 E-Tron (241 miles) but rise above the smaller Volvo XC40 Recharge (221 miles).

With a maximum charge rate of 190 kilowatts for its 420-volt electrical architecture, the EQB can go from 10 to 80 percent charge in 30 minutes on a DC fast charger and add up to 87 miles of range in 15 minutes. Using a 240-volt wall charger, the little Benz replenishes its battery in 5 hours and 45 minutes. For comparison, the XC40 will recharge at a maximum rate of 150 kW and the Q4 E-Tron at 135 kW.

The other crucial part of any vehicle purchase decision – price – is still in question. In Germany, the EQB is about 10 percent more expensive than the equivalent Audi and 5 percent more than the Volvo, and if that calculus holds true in the US, the Benz should cost less than $55,000. That’s a fair amount of money for a compact SUV, but the EQB will appeal to some thanks to its futuristic “G-Class puppy” styling, airy cabin, and adequate charging and range credentials.

At the very least, it should provide a tantalizing amuse bouche for Mercedes’ next-generation compact vehicles, which will ride on a new platform that will be optimized for EVs before being retrofitted for gas engines. As for me, the EQB’s stylish paint and interior finishes would almost be enough to get me to pick it over a GLB, while the torquey and smooth driving experience is rose gold icing on the cake.