Borne from a goal to build an electric car that consumes less than 10 kilowatt-hours of energy per 100 kilometers (6.2 miles per 100 kWh), the Mercedes-Benz Vision EQXX concept debuted in January with a claimed range of 621 miles (or 1,000 kilometers) per charge. But talk is cheap and promises like those are only worth about as much as the paper they’re printed on, so Mercedes-EQ put its aerodynamic baby through a real-world torture test. 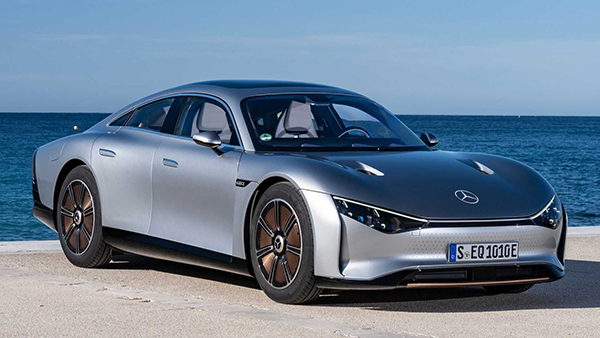 Driving the 628 miles (1,008 km) from Mercedes’ Electrical Software Hub in Sindelfingen, Germany, to the Mediterranean community of Cassis, France, the ultra-aerodynamic EQXX actually made the trip in a single charge while consuming only 8.7 kWh per 100 kilometers. At the end of the journey, the car was even indicating it had another 13 percent or so left in its battery, good for another 80 miles or so.

As such, the EQXX’s passively cooled lithium-ion battery, active aerodynamics, solar roof panels, and wind sensors all had to work well in the real world, giving Mercedes engineers the data they needed to make the trip in one charge. With a wealth of easily digestible information available, it’s clear that the automaker wants the transition to EVs to be as seamless as possible.

Keen to celebrate the record-setting trip, Mercedes-Benz invited me to the company’s design center in Southern France to enjoy a chauffeured spin around the block in the Vision EQXX. Given how nicely the concept feels from the passenger seat, all that advanced engineering may arrive sooner than you think. 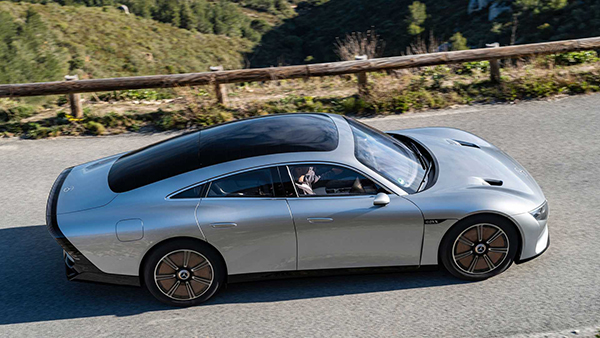 Silver Arrow
The EQXX boasts a number of interesting materials and construction choices to keep weight low and strength high, but all most folks will see is how graceful and organic it looks. A long tail and 2.0-inch-narrower rear track help improve aerodynamics, while strong haunches and a tapering roofline ensure it looks planted and muscular even as it cuts through the air with a drag coefficient (Cd) of just 0.17.

Funnily enough, the EQXX’s svelte shape and wind-cheating aerodynamics are slightly at odds with one another – the Coke-bottle profile isn’t great for turbulence, so designers had to include crisp ridges behind the front wheel arch to give air a clean break around the body sides. Without any visual compromises, the EQXX could have perhaps achieved a 0.15 Cd according to Mercedes’ chief aerodynamicist Teddy Woll, but designers insisted that the concept not be a bland, featureless teardrop. I think the extra couple points were worth it for how lovely the Vision EQXX looks.

The interior is just as impressive as the bodywork. Cabin materials are vegan, sustainably sourced, and made from recycled materials wherever possible. For example, the floor covering and Dinamica seat and door panel inserts are made from 100 percent recycled polyethylene, while the shag floor mats are made from fast-growing bamboo. The Deserttex seat upholstery comes from the leaves of the nopal cactus, which are dried, ground up, and combined with polyurethane for a durable and supple finish. There are even a handful of leather-like accents made from lab-grown fungus that can be tanned and dyed just like real hides.

Presiding above all those unique materials is a 47-inch, 8K LCD display that spans the width of the dashboard. Illuminated by an array of micro-LEDs, the screen has 3,000 selectable dimming zones that make it even more energy-efficient than Mercedes’ OLED-powered Hyperscreen. The display provides real-world solar and wind information and can suggest the driver take an alternate route or reduce speed to improve range if the weather dictates. The only off-putting feature is a new avatar who takes a humanoid form to provide navigation and entertainment recommendations – Hey Mercedes never looked this creepy. 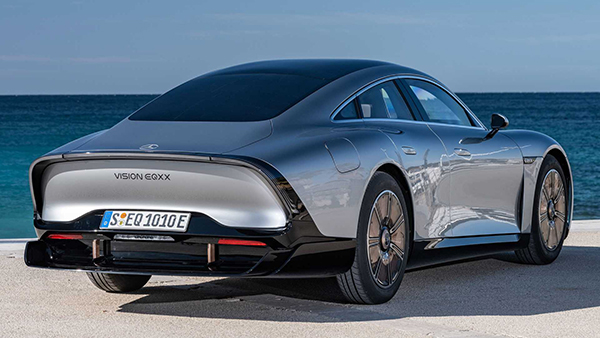 Driven To Succeed
Strapping into a one-off concept car worth millions of dollars has a way of making one forget about fancy materials and Eagle Eye–esque digital assistants, though. Once I’d safely buckled in, my driver Friedemann Flache (who actually handled the first traffic-clogged leg of the trip from Stuttgart to Cassis) toggled the parts-bin gear selector and we set off for a 30-minute cruise through Southern France, taking a variety of surface streets and highways.

Weighing in at 3,869 pounds, the concept is light for an electric vehicle, which also helps its 241 horsepower feel a bit stronger than that number would suggest. In fact, the EQXX actually has a better power-to-weight ratio than the 5,467-pound, 329-hp EQS 450+. Punching it on the freeway, Friedemann had no trouble carving through heavy, slow traffic at 75 miles per hour, driving with the kind of authority that comes with spending hours and hours driving this very vehicle – through challenging Swiss traffic no less.

The Vision EQXX is decently screwed together, though its low-resistance tires and meager insulation combine for a fair amount of roar over varying pavement. That said, Mercedes’ typically high standards for noise, vibration, and harshness don’t feel like they’re far away, a high achievement for a hand-built car. The suspension is stiff but not unyielding, and the prospect of a 1,008-km drive doesn’t seem as unpleasant as it might in most concept cars – that is, until you learn the drivers were cautioned to use the HVAC’s vent function only, not its air conditioning or heating.

For a one-off, I was impressed by how seamless and intuitive the infotainment system is, especially the efficiency monitors. A set of real-time wind and solar sensors tell the driver how much energy is being wasted or recuperated via head- and tailwinds and the angle of the sun. The three-dimensional navigation also provides suggestions for brake regeneration if, for example, the driver is approaching a curve or long downhill section.

The EQXX’s cabin is long and low, which means you sit close to the floor with your legs out in front of you; narrow windows and a hot-rod roofline contribute to some claustrophobia too – not exactly what you want in a car that’s lower than most McLarens. But once I’d grown accustomed to the sightlines (and the constant barrage of car-spotting paparazzi), I began to relax and enjoy the accommodations a bit more. The unique interior materials feel modern and cossetting, especially the 70s-chic shag carpet, and the ultra-wide infotainment is both useful and beautiful to look at. 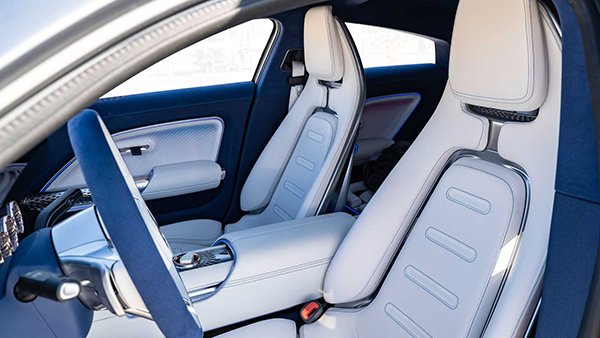 Burying The Lede
All of that plays secondary to the Mercedes-Benz Vision EQXX’s primary mission – zero-emissions, high-efficiency motoring that will eventually trickle down to the masses. We’re probably at least a decade out from seeing widespread adoption of its lightweight, passively cooling battery (liquid cooling is still more reliable and easier to implement) or its breezy active aerodynamics. But Mercedes gets major kudos for the EQXX and its actual 1,000-km trip, facing traffic, rain, wind, road construction, and more, and still emerging from the other side no worse for the wear.

Mercedes’ experimental streamliner will contribute some of its technologies to the next generation of A- and B-Class cars, which will ride on an EV-first modular small platform called MMA. What features those cars will receive remains to be seen, but between the automaker’s commitment to be electrified in every segment by 2025, fully electric by 2030, and totally carbon-neutral by 2039, it’s fair to expect some efficient, EQXX-inspired technology in every new Benz from here on out. If Mercedes cars of the future look or drive anything like the Vision EQXX, we’re all in for a treat.