The next-generation Mercedes-Benz E-Class is in development. Recent spy shots showed the sedan variant dropping some of its camouflage, and the styling changes will come to the entire model lineup, including the hot AMG E63 variant. However, our spy photographers haven’t captured the high-powered performance model out testing yet, but a new rendering from our friends at Motor.es attempt to predict what it will look like when it debuts. 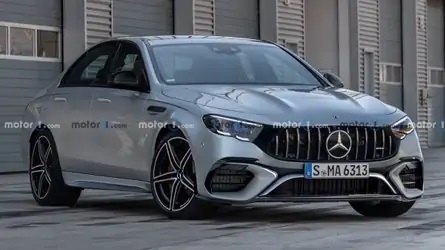 If the regular E-Class test vehicles are any indication, the E63 will likely receive an evolutionary design update. The rendering shows off the performance brand’s iconic Panamericana grille, flanked by redesigned headlights with new lighting signatures, which we’ve already seen in the spy shots. This rendering connects the grille to the headlights with black trim, a styling feature seen on other Mercedes models.

Underneath the new face is a large lower grille opening flanked by large intakes and black trim. The fender features a stylish vent over a badge that likely mentions the “E Performance” powertrain hiding under the hood. We don’t know what kind of engine the next-gen AMG E63 will arrive with, but it’ll likely be a hybrid just like the other AMG variants.

The AMG S63 E Performance debuted earlier this week, packing a twin-turbocharged 4.0-liter V8 engine and an electric motor with a plug. The total output is a staggering 791 horsepower (590 kilowatts) and 1,055 pound-feet (1,430 Newton-meters) of torque. On the other end of the spectrum is the C63 S E Performance, which gives a 2.0-liter turbo four-cylinder some electrical assistance to create 671 hp (493 kW) and 752 lb-ft (1,019 Nm) of torque. Either engine could suffice in the AMG E63.

The end of the year is approaching, leaving Mercedes little time to reveal the new E-Class. We expect the car to break cover in the first half of 2023; however, we don’t expect to see the AMG variant alongside it. Our spy photographers have yet to capture it, and Mercedes often reveals them months after the standard model breaks cover. We could see the next-generation AMG E63 sedan and wagon debut before the end of next year.