It’s bold of Mercedes to give its winning C-Class recipe such a change so many generations in, but it could be a timely rethink. It’ll look sportier, and we believe that this will be the best C-Class to drive yet. It achieves this new identity without sacrificing ride comfort too much, either. 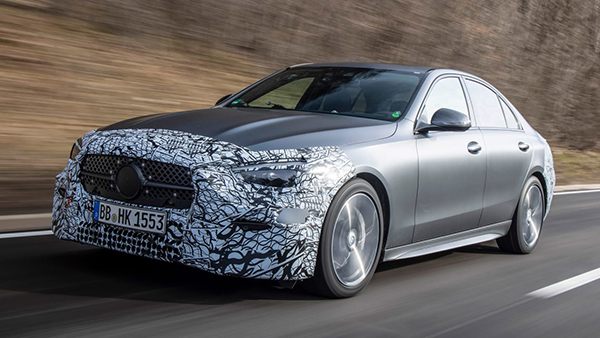 Mercedes is readying a new version of one of its most important cars – the C-Class – and the official countdown to reveal has begun.

The outgoing generation model has been a big success since launch in 2014. Mercedes says it has sold 2.5 million of them, but the winning recipe is being changed for 2021. The C-Class will undergo a slight identity change, with a new, sportier emphasis being prioritised. 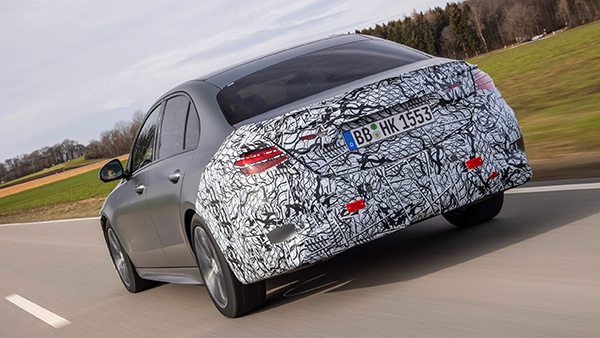 Penned by Mercedes design chief Gorden Wagener, we can pick out plenty of the new design beneath the light camouflage of the prototype we’ve been for a ride in. At the front are new digital LED headlights with a sharp stare, a bonnet with an AMG-like power dome is standard for all models, and the big and bold, AMG-style central star badge on the front grille will be on all models. There’s also a more athletic looking rear end about this new C-Class too.

We’ve only allowed in the passenger seat, but we can still take in some of the major changes on the inside. There’s a brand new steering wheel, but also, the C-Class now comes with serious S-Class inspiration – the dashboard is a downscaled take on the arrangement found in the latest version of the brand’s flagship limo, with a floating style digital instrument panel behind the steering wheel and a huge portrait touchscreen display growing out of the middle tunnel and flowing into the centre console. We can feel the extra space inside too – there’s 10 millimetres more width thanks to a wider track, and while that doesn’t sound like much, the ergonomics of the cabin make sure it’s felt. 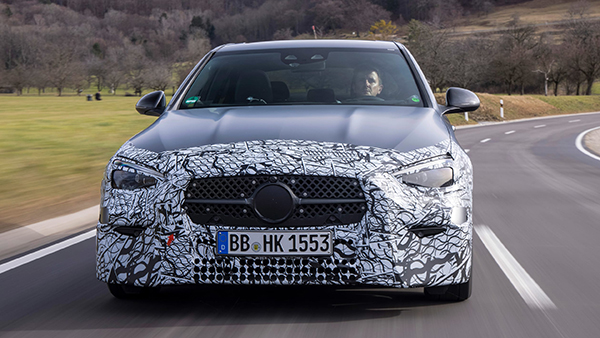 The new C-Class is slightly longer than the old one at 4,750mm, while the wheelbase is 25mm longer too. It means – alongside a bit more room for heads and shoulders – that there’s more room in the rear than ever. It should be a big improvement, and one that brings the new Mercedes in line with the latest Audi A4 and BMW 3 Series for versatility.

Chief engineer Christian Früh is behind the wheel of our C300 4MATIC prototype – the most potent version of the C-Class from launch, before AMG models arrive later. First impressions suggest that the newcomer is a more enjoyable car to drive. We were flowing down country roads, but the Baby Benz carves the corners with minimal fuss, and Früh looks relaxed behind the wheel. 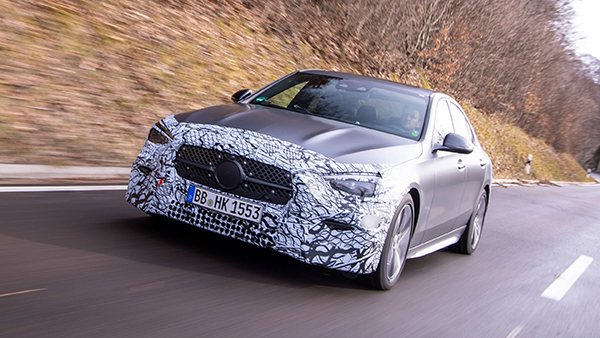 This new found composure can be put down to the C-Class’s latest innovation – four-wheel-steering. Even if the rear wheels turn only 2.5 degrees instead of more than 10 degrees like in the new S-Class, the car handles much better than before and Früh’s steering inputs are much more reserved. “The benefit out here might be even bigger than in a parking garage, where you can reduce up to 60 centimetres from the turning circle,” he explains.

While this new C-Class could be the most agile and engaging version in the model’s long history, it does not try to be an out and out 3 Series fighter. That’s because, while spending a lot of time on improving how the C-Class feels from behind the wheel, the compromises made on comfort aren’t enormous. The biggest casualty is the removal of optional air suspension – something that was previously unique to the C-Class compared with other premium compact execs. Adaptive steel springs are now the norm, but in comfort mode the C-Class still appears to be a solid and comfortable cruiser. 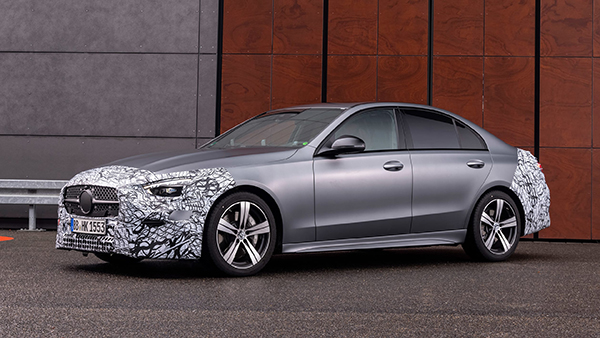 There are many changes under the bonnet, too. Not only has Mercedes electrified all the engines with 48-volt mild-hybrid power – which adds a small power boost and a seamless lift-off and coast function – the C-Class line-up is also now four-cylinder only.

It has yet to confirm the cylinder count for the upcoming high-performance AMG versions of the new compact executive. Chief engineer Christian Früh wouldn’t be drawn on any speculation during our test ride in the new C-Class, but it is strongly rumoured that the next C 43 and C 63 models will turn to electrified versions of Mercedes’ latest M139 2.0-litre four-cylinder turbocharged petrol engine, which was developed for the AMG A 45 hatch.

In the A 45 S it produces 415bhp – which equates to an astonishing 207.5bhp per litre – but more power is possible. The engine can be mounted longitudinally under the C-Class’s bonnet and a 48-volt mild-hybrid system can add more grunt. Mercedes could target the 503bhp of the outgoing C 63 S, but a smaller, lighter engine over the front wheels could benefit handling.