Mercedes C63 AMG hit a huge hole on the road and broke the axle while doing donuts at a takeover.

First things first. Consider this video as a prime example of what not to do with a car you like, or even one you don’t like. The Mercedes-AMG C63 largely falls into the like category among the world’s enthusiasts and unfortunately, this particular version ends up paying the price for the driver’s dumbassery. At least the car was the only thing damaged in this display of absurdity.

How many bad decisions can fit into a three-minute video? We don’t know the answer to that, but thanks to Speedster404 on YouTube we know it’s at least a dozen, and that’s not including all the spectators in this video choosing to stand in the proximity of this wayward AMG driver. It starts with the venue itself – a reported “takeover” gathering somewhere in California. Attempting any kind of vehicular tomfoolery on such a broken surface is easily bad decision number two. Seriously folks, when you see Grand Canyon-sized cracks in the pavement, getting sideways is the last thing you want to do.

Therein comes the next bad decision, as this silver Merc proceeds to smoke its hides while drifting amid bystanders recording it all with phones. By drifting, we mean a few seconds of barely controlled opposite lock followed by quick direction changes as the driver loses control. The passenger leaning out the side is another bad decision, and finally, the Mercedes blows a tire that also rips off the rear bumper. At this point, we see a Ford Mustang leaving the scene and that’s actually a good decision. But alas, it just repositions closer to the action so that’s what, a half-dozen bad decisions already? But wait, there’s more. 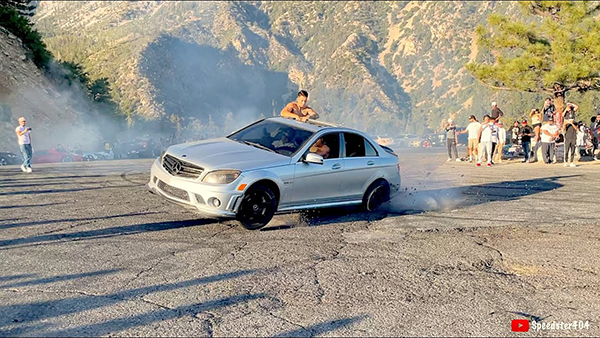 Unfortunately for the poor Mercedes, the torture doesn’t end. The driver makes a bad decision to mount up a new wheel and come back, now with shirtless passengers hanging off both sides of the car. After a few spins the driver slides into something, but a quick check apparently showed no damage, or at least damage that wasn’t severe. The collection of bad decisions point to an inevitable conclusion and it finally happens right in front of the camera, as the Merc drifts into that aforementioned Grand Canyon crack.

The rear tire shreds, the car nearly rolls over, and when the dust settles, that rear hub is properly borked. The video says the C63’s axle broke, but the car is seen moving under its own power after the crash so damage is likely relegated to the wheel, hub, and suspension components. In any case, it’s an expensive end to an exhibition of ignorance.

We’re all for having fun in cars, but if you want to spin donuts, a demolished section of asphalt surrounded by people and cameras is perhaps the worst place to do it. Come on, people. We can’t believe we even have to say this stuff. Be smarter. Your friends, family, innocent bystanders, and your car will thank you.